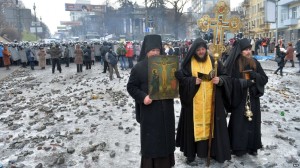 When I asked the official in charge of religious affairs in the Ukrainian government why it and so many of its neighboring states turned to religion in their rejection of Soviet control, he explained that “it is due to a failure of ideology.” Marxist and other secular ideologies have “failed,” he explained, for they are not able to “touch the heart” the way ethnic and religious identities do.
Whether or not Marxist ideology “failed,” it is clear that it became unhappily tied to what was perceived as Russian imperialism. The liberalization of Soviet policies in the 1980s opened the floodgates for a lively expression of ethnic loyalties in Eastern Europe that only intensified after the end of the Soviet Union on New Year’s Day in 1992. In such diverse locations as Lithuania, Armenia, East Germany, Poland, and Ukraine, religious movements were at the forefront of opposition to Soviet control and the emergence of new nationalisms. In a sense, these were old nationalisms; they traced their identities at least to the nineteenth century and in most cases much earlier. In their post-socialist form, however, these national identities were new: their combination of democratic popularism and cultural nationalism was a distinctive feature of the modern age.
In many of these countries, Catholic Christianity was a rallying point for nationalists eager to separate themselves from the Russian cultural domination symbolized by the Russian Orthodox Church. This was the case in Ukraine, where the Catholic Church in the western part of the country continues to be at the forefront of nationalist causes. The religious culture of Ukraine is more complicated than simply a Catholic-Orthodox split, however, since there is a form of Ukrainian orthodoxy that is distinctively Ukrainian and stridently anti-Russian. The statement declaring Ukraine’s independence on August 24, 1991, claimed “a thousand-year-old tradition of building statehood,” which originated in the tenth century, when Vladimir the Great created a separate Ukrainian Church.
This link between Ukrainian nationalism and religion persisted in the post-Soviet period, especially in Western Ukraine. The eastern part of the country contained a large percentage of ethnic Russians, most of whom were Russian Orthodox. The residents of Western Ukraine have been Catholics—members of the Uniate Church, a Ukrainian branch of Catholicism—or members of a distinctly Ukrainian form of Orthodoxy that defies the authority of the Russian Orthodox hierarchy. The conflict in Ukraine, therefore, is not just an ethic and political split, but a contest of competing visions of religious nationalism.

You can see the complete essay here