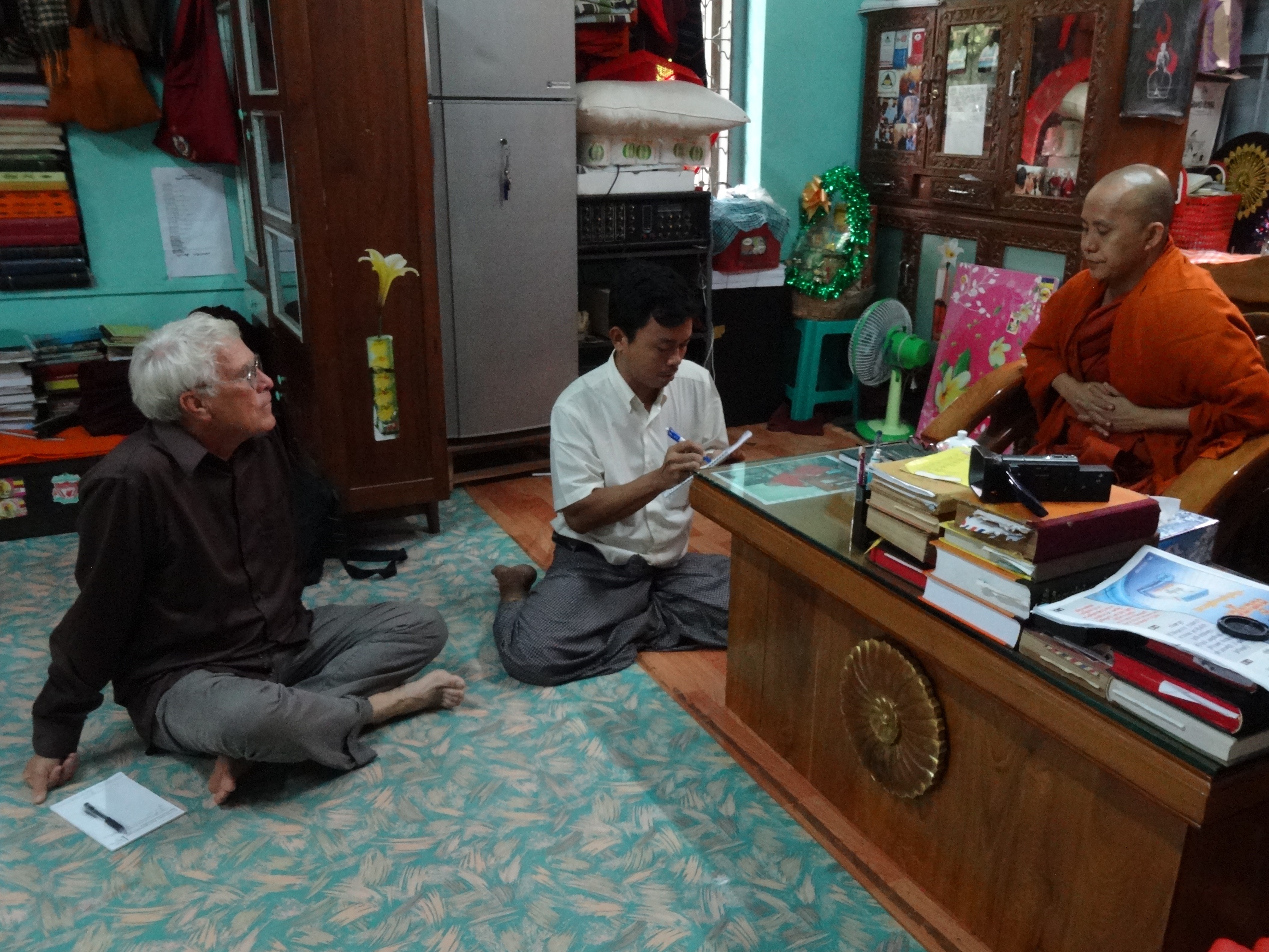 This essay was originally posted in Religion Dispatches.

“Do I look like a terrorist?” the orange-robed monk asked me, jovially confident that I would see the question as absurd.

The monk, Ashin Wirathu, had recently been portrayed on the cover of Time magazine’s international edition over the caption, “the face of Buddhist terror.” He was credited with inciting angry Buddhists in Myanmar to riot against the Muslim minority, burning mosques and Muslim-owned shops and houses, and attacking Muslims who dared to challenge them. In 2013 and 2014, scores were killed and thousands were displaced from their homes. In the town of Meiktila, a Buddhist mob surrounded a Muslim man and set him on fire.

Wirathu was blamed for fanning the flames of ethnic hatred. He is the most well-known spokesman for the “969 Movement” —named after the nine special attributes of the Buddha, the six distinctive features of his teachings, and the nine characteristics of monks—which was formed to defend the purity of Burmese Buddhist culture against its adulteration from outside influences, primarily Muslim. Hence it was widely regarded as an anti-Islamic hate movement.

When I talked with Wirathu recently in his comfortable office in the Ma Soe Yein monastery in the central Burmese city of Mandalay he was prepared to defend himself against the terrorism label branded him by Time magazine and many other journalists. Buddhism is all about peace, he kept reminding me.

“If we support Buddhism we are creating peace in the world,” he said repeatedly. So far, nothing terrorist about that.

His monastic office radiated spiritual authority. Though Wirathu is only one of 14 senior monks on the governing body of the 2500-man monastic complex, he clearly occupied a leading position within it. Only the framed pictures on his wall—mostly newspaper clippings and pictures of himself—were indications of his charismatic, rabble-rousing reputation.

“From whom?” I asked. He implied that there were a host of people out to destroy Buddhism, and I kept pressing him to tell me whom they were.

“Muslims,” he said, finally. Or more precisely, “Islamic extremists,” as he called them, people who denigrated Buddhism. Not all Muslims were extremists, he said, though most were under their influence, so virtually all Muslims in Myanmar were suspect.

I asked him for examples of how the tiny Muslim minority in Myanmar—some four percent of the population—could possibly threaten the Buddhist majority. The first thing that came to his mind was the case of Muslim men wanting to marry Buddhist women. After marrying them, he said, the Muslim men would force their wives to convert to Islam and step on statues of the Buddha. It was not clear how frequently he thought this sort of thing happened. When I asked others in Mandalay they could only think of a handful of cases of ethnic intermarriage.

Wirathu also thought that Muslims were secretive, since their mosques were not open to everyone. (When I mentioned this to a local Muslim leader, he said that the mosques were closed solely to prevent people from coming inside with their shoes on and desecrating the worship space.)

Then Wirathu warmed up to his main concern, which was the penchant of “Islamic extremists” for violence, and their desire to rule the world. He cited the atrocities of groups such as al Qaeda and ISIS as examples. He also thought that their numbers were greatly expanding in Myanmar through immigration and having relatively larger families, and that this was a purposeful design to dilute the purity of Buddhist culture in the country and eventually take control.

“They are trying to transform Myanmar into a Muslim state,” Wirathu said. He claimed that this was the reason that he and the 969 movement are trying to protect Burmese Buddhism from what he regards as a kind of cultural annihilation.

Wirathu insisted that his only role was to preach the truth. Though his fiery sermons have been reported as inciting violence, Wirathu disassociated himself from such acts, saying that his own followers were under his control. He told me that Buddhists had the right “to defend themselves” and if at that time they “inflict injury,” then that can be excused. Thus violence could be justified in a context of defense. But Buddhist ethics, he said, would not allow the faithful to intend to be violent, since, he reminded me, Buddhism is all about peace.

Representatives of the United Nations’ Commission on Human Rights, however, have identified Wirathu as one of the main figures in Myanmar’s pattern of human rights abuse against Muslims, particularly the Rohingya who live in the northern portion of Rakhine province adjacent to Bangladesh. Though the Rohingya people claim to have lived in the region for centuries, many Burmese regard them as aliens, and the most recent government census refused to let them identify themselves on the rolls as Rohingya rather than Bengalis. Wirathu has been outspoken in his insistence that the Rohingya are not legitimately native to the country but are interlopers.

This dismissal of the rights of Rohingya in Myanmar is one of the things that has been criticized by the UN Human Rights Commission. According to Wirathu, rich Muslim countries have bought off the UN, and its human rights accusations were part of a Muslim plot. “It is not the United Nations,” Wirathu told me, “but the United Muslim Nations.” Wirathu claimed that President Obama was also duped by these influences, and this is the reason why he spoke about the rights of Rohingya people in his recent visit to the country.

The conspiracy was even broader, Wirathu said, since the world’s news media were also under control of Islamic extremists. It was for this reason that magazines such as Time could label him a terrorist. In fact, he claimed, it was the media that was in league with terrorists by branding him and other outspoken Buddhist leaders as the foe.

The other well-known Buddhist activist in the region was Galagoda Aththe Gnanasara, the leader of the Bodu Bala Sena movement in Sri Lanka, which Time, Economist, and other international news media have also criticized. Much like Wirathu, he has railed against the imagined threat of a small Muslim minority in his country, and like Wirathu was accused of inciting riots against it. I asked Wirathu if he and the BBS were working together, and he admitted that he had met with Gnanasara, but insisted that their agendas were separate. Nonetheless, a number of news reports claim that Wirathu’s 969 and Gnanasaara’s BBS movements are in league, and there are reports that Wirathu has been in contact with Buddhist monks from Thailand’s southern border with Malaysia, where pitched battles have been taking place between Buddhists and the Muslim majority in that locale.

Wirathu said it was not just Buddhists who were concerned about Islamic extremists. He said that his fears were shared by some Muslims, and gave the name of a leader of the Muslim community in Mandalay who he said was in agreement with him. Later that day I talked with the Muslim leader, and he said that of course he was concerned about al Qaeda and ISIS worldwide, but that the Muslims in Myanmar were of no threat to anyone. He implied that Wirathu was playing into the hands of politicians who wanted to use the Muslim scare for political purposes.

This was an analysis that I had heard from others in Myanmar, including journalists and political leaders. The ruling party had undertaken a great risk to their power by opening the government to a greater degree of democratic rule. Even though the military-backed Union Solidarity and Development Party swept the 2012 elections, its leaders were apprehensive about the 2015 elections and the likely candidacy of Nobel Prize-winning Burmese leader, Aung San Suu Kyi. Some thought that by creating an artificial threat the military’s party would be seen as strong defenders of the nation, and they would gain in the upcoming elections as a result.

Wirathu has been ranting against Muslims for some time and in 2003 was put in prison for inciting violence against them. He was released in 2010, about the time of the democratic reforms, so some have speculated that his release was motivated by political considerations, like unleashing a tiger. But whether or not Wirathu was a pawn in this political calculation—and whether he was aware of it, if so—is unclear.

What is apparent is that he has convinced himself, and perhaps his angry following, that there has been a great but hidden struggle going on behind the quiet Buddhist civility and lush tropical landscape of the ancient Burma that is now the rapidly economically developing Myanmar. It is a battle between good and evil, between Buddhist morality and the Muslim hordes he imagines to be poised to conquer Burma’s soul. And Wirathu would like to be its savior.

The interview was conducted with the translation assistance of Thein Toe Win.