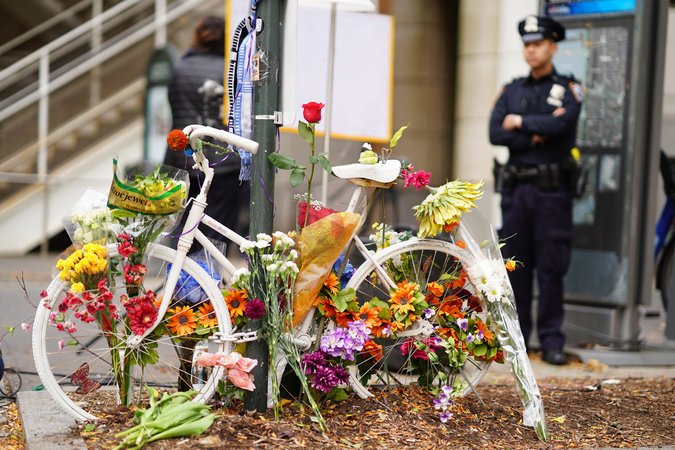 Just when we thought the Islamic State was dead, Sayfullo Saipov drove his rented Home Depot truck down a bicycle path in lower Manhattan, killing eight and injuring far more. When his truck ground to a stop after ramming a school bus and Saipov fled on foot, only to be caught moments later, a note left inside the truck cab said that the Islamic State “would endure.”

What was jarring about this note, aside from the link it made with radical Islamic ideology, was its proclamation of the movement’s endurance. This is precisely what seems to be challenged by recent events. Given the military collapse of ISIS—the Islamic State of Iraq and Syria (or al Sham, greater Syria, commonly known as the Levant)—in Syria and Iraq in recent months, the movement does not seem to have much endurance left. After a long siege and a horrific house-to-house battle, the largest city controlled by ISIS, Mosul, was retaken by a combination of Iraq and Kurdish forces along with U.S. military air power. More recently the capital of ISIS, Raqqa, has been liberated by Syrian and Kurdish forces, and soon after the last remaining town held by, Deir ez-Zor, has fallen. There remain pockets of resistance along the Iraq-Syrian border, but in general it is fair to say that ISIS days of territorial control are over.

But ISIS has never been a movement that is defined solely by territorial control. The enormous cyber network of participants in online chats on Twitter and Telegram, and the global audience for the slick online publications such as Inspire, Dabiq, and Rumiyah have constituted an alternative movement rivaling the size and significance of the Arab Sunni-based Caliphate in Syria and Iraq. The global network was nourished in part to gain recruits to come to the Middle East battlefields where they provided a stockpile of suicide bombers willing to destroy themselves in savage attacks against ISIS’ imagined enemies.

Some 30,000 young fighters came from all over the world to Syria and Iraq during the movement’s heyday in 2015 and 2016. But a much larger group were also involved, though primarily on line, on the animated chats of the online social networks and as readers of the online ISIS literature.

This online network constituted a separate movement. In the Twitter chats they often would call themselves baqiyah, a term that means something that survives or endures, and in this case refers to the enduring online ISIS community. In one of a series of tweets from a teenager in Canada, he said that his parents found some of his messages and were trying to take his computer away, but that they would not be successful, he said. He had other ways to get on line. Besides, he confessed, he had no other friends than the ISIS baqiyah, the online community, and without them, he said poignantly, he was nothing,

It is this cyber network that endures, and will continue to endure, long after the territorial control of the movement has been obliterated. Some journalists and pundits have commented that ISIS is now metastasizing and changing. But in fact it was always a diverse and decentralized organization, loosely organized around two different kinds of movements, one on the ground in Syria and Iraq and the other in cyberspace throughout the world. Though the headquarters in Raqqa were important–since someone had to produce the glossy online magazines somewhere, presumably there–nonetheless the social networks on twitter and Telegram, which are the real locations for the cyber community to exist, can continue indefinitely with no center organization needed.

The way these social networks lead to actions is illustrated by the recent Saipov attack in New York City. Saipov was Muslim of Uzbek ancestry, but had lived in the United States since 2010 and did not appear to have any direct contact with the ISIS organization. He did talk with other Uzbek Muslims about religious and political matters, it appears, and he likely had connections with the ISIS online community, the baqiyah, through Twitter and Telegram. He likely read the online magazines. In fact, an article in one of the online ISIS magazines, Rumiyah, had some months ago given specific instructions on how to carry out a truck-based attack on a crowd of Westerners. The attacker need not seek or receive ISIS approval, the article said, indicating that it could be conducted by anyone who believed in the ISIS cause. And it said a note should be left to indicate that the attack was being conducted in the name of ISIS.

Two days after the New York City attack, the ISIS weekly newsletter did indeed praise Saipov as “a soldier of the Caliphate.” Yet it is not clear what motivated the 29 year old Saipov to undertake the act. Clearly his career was not going anywhere. He was licensed as a truck driver, but recently the only work he could get was driving his own car as an Uber driver, and whatever financial problems he may have had were compounded by his wife’s pregnancy and growing economic obligations. So he might have been another example of a marginalized young man who was angry at the world and wanted to attack someone and take his own life in the process, and turned to radical Islamic ideology as a legitimating shield. These are cases in which the acts are branded with the ISIS name rather than being directed or even inspired by them.

It is not clear what ideological connection Saipov had with ISIS. But it seems clear than he had no organizational connection with the movement. And in fact the organization of the movement in Syria and Iraq is in turmoil and disorder following the destruction of their main bases in Raqqa and Mosul, and not in a position to direct attacks around the world. Yet even though the territorial ISIS has been defeated, the cyber ISIS remains as a potent network, a virtual community, across channels of cyber space. So when Saipov’s note talks about the endurance of ISIS, it is this cyber movement that truly endures.