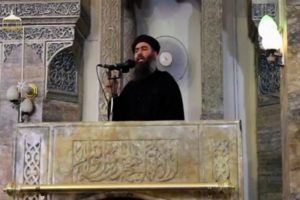 The old Caliph is dead. Long live the new Caliph!

This was the gist of an audio message uploaded onto the social media app, Telegram. It appeared scarcely five days after the October 26 US military raid near the Northern Syrian city of Idlib that ended in the suicide death of Abu Bakr al-Baghdadi, the notorious leader of the Islamic State (also known by the acronyms ISIS and ISIL).

Why so soon, and why a caliph?

Especially after the territorial defeat of the movement and the destruction of their headquarters in the Syrian city of Raqqa, Al-Baghdadi had become more of a figurehead of ISIS than its organizational leader. The movement continued on its own momentum through decentralized cells. It did not really need a new leader.

Yet a successor to al-Baghdadi was named, someone in the inner circles of the movement who adopted the pseudonym of Abu Ibrahim al-Hashemi al-Qurayshi. He was proclaimed not only as the organizational leader, but also as Caliph—the spiritual incarnation of Islamic tradition’s early leadership.

There are practical and ideological reasons why the surviving leaders acted so quickly. Not only did they want to affirm the leadership of the movement but also they wanted to assert the continuation the idea of the Caliph itself.

It shows that ISIS is still alive

This swift action by the surviving leaders showed that there were indeed surviving leaders. The very fact that they could convene a shura, a council of elders, is significant. It is not clear whether this was a physical meeting of the leaders or whether it was a consensus that came about through other means. But if the latter was the case, it would be interesting to know how they communicated, since most of the leadership has not used electronic devices for fear of being located, and presumably the leaders are scattered and in hiding.

The use of the term “mujahidin” (fighters) in conjunction with the term “shura” (council) is interesting, since there was a Mujahidin Shura Council comprised of different jihad Sunni Islamic groups, including al Qaeda in Iraq, that preceded the formation of ISIS. This could signal that there are several groups that are now involved in the resurgence of ISIS, including perhaps the jihadi groups that control the territory around Idlib, where al-Baghdadi was hiding out.

Though they were in opposition to ISIS previously, an accommodation among the groups would explain why they allowed the ISIS leaders free passage in the region and the ability to meet freely. It would also explain their involvement (if indeed this turns out to be the case) in the selection of a new leader.

There had been a second in line to Baghdadi who was waiting to take over. Abu Hassan al-Muhajir was Baghdadi’s spokesman and heir apparent in the eventuality of his death. Baghdadi wore a suicide belt at all times and was constantly on the move with the assumption that he was a marked man. Al-Muhajir’s succession lasted only a day, however, since he was killed by a US military strike the day after al-Baghdadi’s death on a road near the town of Jarablus in Aleppo province in the same general area of Syria where Baghdadi was hiding.

With the killing of al-Muhajir the ISIS council moved quickly to proclaim someone else as leader, and also to appoint a new second-in-line in case he was killed. The point was to assert that the movement was not dead, even if the leader was.

The very fact that the movement had the organizational ability to meet and agree on a new leader and to announce that fact to the world was impressive. It was meant to impress, and to bolster the confidence of its far-flung followers.

By quickly anointing a new leader, the movement broadcast to its followers that the charismatic authority continued. Fighters in the movement had previously been urged to pledge loyalty not just to the Islamic State but to the person of al-Baghdadi himself. In proclaiming a new Baghdadi, the leadership circle wanted to emphasize that this line of personal authority was being maintained.

For this reason it was critical to assert that the new leader, Abu Ibrahim al-Hashemi al-Qurayshi, was not just a competent leader, he was a Caliph, a spiritual authority. His credentials to be regarded that way are asserted in his newly-created name, al-Qurayshi. This implies that he is from the Qurayshi tribe, the Arab community that was dominant in Mecca at the time of the Prophet’s birth, and to which the Prophet himself is said to have been descended. Therefore the new Caliph is in the lineage of the Prophet’s family and has the spiritual background to be proclaimed as Caliph.

It gives credence to the idea of an Islamic State

Because Baghdadi’s successor is regarded not just as the ISIS leader but as Caliph, this appointment underlines the idea that he is the leader not just of a movement but of an Islamic State. Without a Caliph, it is not a Caliphate; it is just another jihadi movement.

What sets ISIS apart from al Qaeda, al Nusra, and other extremist Islamic movements is not just that ISIS adopts the radical salafi jihadi ideas in an even more extreme way than they do, but also that it is different: it is a Caliphate. That is, the movement proclaimed itself to be the incarnation of the early Islamic community. All of the extreme practices of the movement were justified by its interpretation of what the leaders thought were the rigid rules of early Islam.

Much of the appeal of the movement, especially to its far-flung followers around the world who connected with it on line through internet websites and Twitter, Telegram and other social media platforms, was that it was something new in the jihadi world; it was a Caliphate. It was the “real deal,” as some of its followers asserted. Without a Caliph, a Caliphate is just another movement.

For these reasons the surviving leaders had to act swiftly. They needed someone to represent the endurance not just of the movement, but of the Caliphate itself. Whether it will be accepted as such by its followers is yet to be seen.