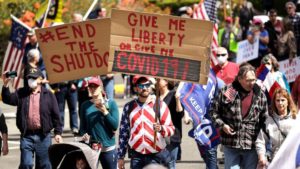 The recent pictures in American media of angry and largely white male protestors, many with Trump’s MAGA hats, could have been taken several months ago. The target, however, is vastly different.

Just a couple of months ago the perceived global assault on American nationalism was economic—entangling trade alliances that were touted as taking away American jobs—or forms of cultural globalization aimed at undermining the American way of life.

The perception that there was a global cultural assault on nationalism was easy to imagine since the evidence of it was closely at hand. After all, waves of new immigrants from non-European countries entered the United States in recent decades, some illegally. They were easy to marginalize since they were different from white Euro-Americans, not only ethnically but in some cases by their religion. Worst of all were those who were Muslim.

But the new pictures of virtually the same angry white males with MAGA hats do not show them protesting against Muslims or Mexicans. They are protesting against a new global threat, virtually invisible ones, tiny virus cells. Covid-19 is the new global enemy, imagined to be aided by those scientists, health professionals and public leaders who appear to conspire with the virus to vex the ordinary lives of angry white males with MAGA hats. It is now covid-19 that is thought to be undermining the American way of life.

Covid-19 is a neologism created by shortening the phrase coronavirus disease 2019. Like SARS and the other previous coronaviruses it is an airborne respiratory virus that is highly contagious. Because it was likely first transmitted to humans from live animals in Wuhan, China, it has been possible to link the disease with foreign and sinister global forces out to undermine the American way of life. The conspiracy theories regarding its origins and spread are ubiquitous.

To a paranoid segment of the right-wing community in the US, these conspiracies were linked to globalization. The virus was the attempt of China, or the UN, or Bill Gates, or 5G technology—or some other sinister force—to scare Americans and deprive them of their liberty. Rather than blaming the government for its ineptitude in allowing the virus to spread rapidly, making the US by far the most infected nation on the planet, the blame was placed on fictional foes.

Perhaps the most frightening of the imagined falsehoods has been the notion that the disease is not real, but a hoax perpetrated by clever liberals to sedate the populace. Hence those who held to this fiction could cavalierly ignore any of the recommended restrictions, crowding together in public and thereby endangering everyone else. Doctors treating some covid-19 patients have had to contend with their arguments that they could not possibly have the disease since it was a hoax, and it didn’t actually exist.

These fears and the anger over having been constricted by restrictive pandemic regulations have brought hordes of gun-toting angry white men and women out on the streets in protest. Before American cities erupted in demonstrations against police brutality, led largely by young Blacks and progressive whites, these white MAGA hat-wearing protestors had the media’s attention. They will likely return in force, especially if new restrictions are adopted when the predictable second wave of virus infection occurs.

For the moment it seems that the global pandemic and its restrictions will continue to be at the center of American right-wing populist rage for some time to come. Rather than cultural nationalism this anger expresses a nationalism that is equally anti-global and defensive, a covid nationalism. The culture wars, and the animosity against immigrants, refugees, and Muslims has taken a back seat. The question is whether this covid nationalism is a turning point, whether it a brief deflection of attention, or whether it will be merged with cultural nationalism.

The question is not easy to answer since it largely depends on the future of the pandemic. The optimistic scenario is that the worst is over, that the rate of infections nationally will continue to decline, the economy will slowly reemerge and a vaccine will be found to be effective by the end of the year. In this scenario, the current fears may subside in the reemergence of normalization. And the old forms of cultural nationalism and its disdain against immigrants, minorities and Muslims may again surface. Or perhaps by then they will have been forgotten.

But the optimistic scenario is not the likely one. The possibility is real that there will be waves of new infections and with them new restrictions for at least a year or more to come. The greatly anticipated vaccine may be years off, and perhaps not discovered for decades. There is still no vaccine for AIDS, for example, though it has become a managed disease. Perhaps the same could be the case with covid-19. We could learn to live with it, though many of the restrictions would continue to be in place.

This means that resentment against the restrictions will continue. The conspiracy theories are likely to proliferate, and the sense that the luxurious American way of life is being corroded by sinister global forces may expand. Covid nationalism could be a major element of the continuing right-wing populism of the future.

But that does not mean that cultural nationalism will be forgotten. One can easily imagine conspiracy theories emerging—as indeed some already have—that blame immigrants, Muslims, liberals, foreign interference and global forces for the pandemic and its restrictive assault on familiar daily life. Thus the two forms of populism could forge an unhappy alliance.

At present covid nationalism—a populist protest against an imagined global intrusion of pandemic restrictions—is largely an American phenomenon. But like the virus itself, it could easily spread across borders, and become a feature of angry segments of the populace in Europe and other parts of the globe. There, too, it could merge with the existing anti-immigrant cultural nationalism of those regions. The global emergence of a covid-cultural nationalism could be the perfect storm of the future.