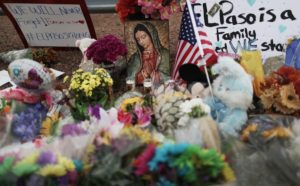 A version of this article is posted on Global-e, Tuesday, August 13.

The manifesto of Patrick Wood Crusius, the 21 year old man responsible for a blood bath killing 22 innocent shoppers in a WalMart store in El Paso Texas on August 3, begins with praises for another attacker in a location far from Texas– in Christchurch, New Zealand. The Christchurch shooter, Brenton Tarrant, killed 51 worshippers at two mosques on March 15 and he, in turn, had praised another attacker at a location that was far from both Texas and New Zealand–in Oslo, Norway. There, Anders Breivik killed 77 youngsters on July 22, 2011, at a summer camp for a political party supporting multiculturalism.

All three of these killers left manifestos. These documents were remarkably similar in that they presented themselves not as killers and terrorists, but as soldiers in an honorable battle. The purpose of the struggle was in each case basically the same: protecting the purity of White European culture. In the case of Breivik and Tarrant it was specifically a Christian culture. Breivik imagined himself to be reenacting the defense of Vienna against the Muslim army. Tarrant also thought of himself as a warrior for Christendom. Written in white on the black gun stocks of his weapons were the names of significant battles in European history in which Muslim forces had been repelled. Though the El Paso shooter, Patrick Crusius, did not refer to religion in his manifesto, he did cite the defense of European culture and ethnic purity as one of his motives. In his own way he was a warrior for European Christendom as well.

The global diversity of these instances of religious and ethnic xenophobic extremism gives a hint of why they are rising now. They are global, and the phenomenon of globalization may be part of the problem.

Therein lies a paradox. Globalization is marked by a rapid mobility of peoples, mass migrations, the proliferation of diaspora cultures, and a transnational sense of community provided by internet relationships. Yet despite these features, xenophobic ethno-religious nationalism persists. In fact it seems to flourish in a global world. Religious and ethnic affiliations, while providing a connection to transnational networks, also offers resources for shoring up local identities. Why have limited loyalties and parochial new forms of ethno-religious nationalism surfaced in todays’ sea of post-nationality?

It seems an anomaly. History is poised on the brink of an era of globalization, hardly the time for new nationalist aspirations to emerge. In fact, some observers have cited the appearance of ethnic and religious nationalism in such areas as the former Yugoslavia and the former Soviet Union, Algeria and the Middle East, South Asia, Japan, and among right-wing movements in Europe and the United States as evidence that globalization has not reached all quarters of the globe.

But is this really the case? It may be possible to see these quests for local identities and new nationalisms not as anomalies in the homogeneity of globalization, but as further examples of its impact. In many cases the new ethnic and religious movements are direct reactions to globalization—a fear of the “new world order,” as some patriot movements in the United States have put it. The El Paso killer’s manifesto stated that the tide of Hispanic immigrants would be a sea change in American culture and politics. His was angst over the loss of identity and privilege in a world that is rapidly become multicultural.

But many of these movements are also responses to a perceived failure in secular nationalism. Though the European Enlightenment touted secular nationalism as the most just and progressive form of political organization for the modern world, in many parts of the world this vision is an empty promise. They despair over the insufficiencies of what is often touted as the world’s global political standard, the secular constructs of nationalism that are found not only in Europe and the United States but remain in many parts of the former Third World as vestiges of European colonialism. The El Paso killer’s manifesto railed against the corporate state and the failure of democracy. An exasperated follower of ISIS in Iraq said to me, “what have we gained from being a secular state?”

The old European-version of secular nationalism is under siege precisely at a time when the structure of the nation-state around the world has been weakened by globalization. Its vulnerability has been the occasion for new ethno-religious politics to step into the breach and shore up national identities and purposes in their own distinctive ways.

Some forms of ethno-religious politics are global, some are virulently anti-global, and yet others are content with the attempt to create their own ethno-religious nation-states. The White nationalist killers in El Paso, Christchurch, and Oslo are not alone. They and the many other activists in recent decades, in virtually every religious tradition, who have expressed a strident ethno-religious nationalism have challenged the moral authority of the secular state. They are anti-national globalists in their own way, standing in uneasy relationship with the globalizing economic and cultural forces of the 21st century world.