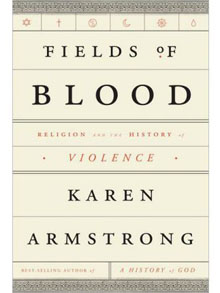 This review by Mark Juergensmeyer appeared in the October 24, 2014 edition of The Washington Post.

The recent rise of religious images in political conflict around the globe has led to a surprising religiophobia, as if religion itself were inherently violent. To this simplistic point of view, Karen Armstrong has written an elegant and powerful response.

Fields of Blood is not just a defense of religion but also an exploration of the relation between religion and the history of violence over the centuries. It is a book both erudite and accurate, dazzling in its breadth of knowledge and historical detail. Though it does not give all of the answers to the curious relationship between religion and violence, it sets us on the right path.

She begins with the obvious truth that religion doesn’t do anything by itself. It’s not a thing, but simply a dimension of human experience. The modern notion of religion as something separate from mundane life was an invention of the European Enlightenment,
a counterpoint to the new notion of secularism. For most of world history, and for most of the world’s populations, the religious imagination has been a part of everything that humans do. Armstrong concludes that “the problem lies not in the multifaceted
activity that we call ‘religion’ but in the violence embedded in our human nature and the nature of the state.”

She acknowledges that this violence is often cloaked in religious language. However, Armstrong seeks to demonstrate that it is not the bloody images and legends in sacred texts and holy history that are to blame, but the political contexts that frame religion as part of the messy pictures.

To make this point, Armstrong embarks on a historical journey from the Babylonian Gilgamesh Epic to al-Qaeda in the present day. The first part of the book covers ancient societies: not just Babylonia but also classical India, China and Israel. In each case she sees the emergence of public violence as part of the formation of state power, and the justifications for violence were often stated in religious terms. In the second part, this theme is developed with relation to early Christianity, Byzantium and Muslim empires.

Armstrong is strongest on biblical history and the development of the Christian church. She shows that a major theme of the Old Testament is between an unruly free society and a stern political order that is imposed by force—by the structural violence of a state. When Christianity emerged, the political order that loomed over the fledgling church was the Roman Empire, and Christians defied the authorities with a pacifism that rejected the power of Rome. Later, however, in 325 CE, when Christianity became the de facto state religion of the empire, the situation was reversed, and church leaders scrambled to justify the military power of the state. One of the Church’s bishops, Saint Augustine, elaborated on an old Greek theory of “just war” to explain how Christianity could support acts of warfare in certain limited situations. Although earlier the Church had advocated a more pacifist position, Augustine argued that this kind of idealism was only meant for a heavenly “city of God.” Down on earth where mortals live in the “city of humans” a more realistic ethic is called for, one that occasionally accepts the use of violence to achieve social order. This Christian acceptance of the political reality that some violence can be justified has continued to be the dominant position of the church down to the present day. Throughout the history of Christianity, however, politicians have grasped onto this religious justification to excuse their own violent exercises of power.

The same religious acceptance of violence in certain political contexts, and the same misuse of it by politicians, is found in Islam. Armstrong shows that the peaceable early Muslims turned to fighting only to defend themselves, and that the notion of jihad is a minor and seldom-mentioned concept in the Qur’an. Later, the issue of state-supported violence for the sake of political order becomes a theme in Islam, as it had been in Christianity, when large empires were established. Though maintained by force, the empires kept the peace, preventing quarreling regions from being in constant warfare and allowing a diversity of cultures to flourish. Islamic leaders routinely protected “people of the book” – Jews, Christians and Zoroastrians – within their domains.

The third and last part of the book is the most interesting. Here Armstrong focuses on the past several hundred years of the modern period, when secularism and religion struggled with each other. Again, there are political issues at stake. Nowhere is this more clear than in recent years, when terrorism and global jihad have come into prominence, in large part as responses to the widespread perception in the Middle East that the United States and Europe have fostered economic exploitation and cultural colonialism in the region. Armstrong regards the war on terror of the George W. Bush administration to be itself a kind of terror and a battle waged with religious zeal.

Once again, Armstrong asserts, politics and human ambition are the culprits behind all forms of public violence. Yet the reader is left with a nagging question: What is there about religion, both historically and today, that makes it such an appealing cloak for the venal aspirations of power-hungry people? Religion may not cause violence – Armstrong is right – but why is there such a dark attraction between the two?

In her closing paragraphs, Armstrong asserts that religion at its best has been able, over the centuries, to “build a sense of global community.” It is a good statement and a true one. But that’s not the whole story. Religion – in the sense of what the theologian Paul Tillich called “the repository of symbols” – has also had long relationships with grandiose power, violence and blood. So religion is not totally off the hook.

In wondering why violence and religion are so intimately intertwined, Armstrong comes close to some interesting answers in a meditation midway through the book on the curious attraction of people to warfare. Grand war, cosmic war, is an exercise of human imagination as well as politics. It is a thrilling alternative world that engages the passions of fighters in ways that no ordinary life experience can do by lifting ordinary conflict into a realm of existential and ultimate encounter. In other words there is a religiosity to war. And there may also be images of profound struggle at the heart of religious thought. When conflicts are seen as sacred, the encounters are even more intense.

Virtually every instance of terrorism in recent years has evoked a God who is perceived to be engaged in cosmic warfare. These imagined battles are about power and politics and more: about freedom and civilization and life itself. In trying to make sense of this remarkable vision of violence and the sacred, Karen Armstrong has done a great service by showing us how wrong some of the simplistic assumptions have been. But she also makes us aware of how much more there is to be known about the awesome dimension of religion in public life.