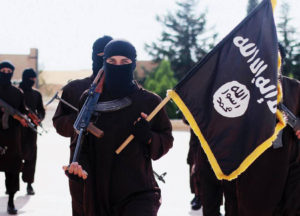 ISIS will return. The reason I feel confident in saying this is because I have talked with them. Earlier this year I was in the Kurdistan region of Northern Iraq where I met with ISIS-suspected detainees in the huge Hassan Sham refugee camp near Mosul, and with captured jihadi fighters in a prison near Sulaimaniya.

“We will return,” one of the former ISIS militants told me. He said that he was disenchanted with the leaders of the movement, whom he blamed for its military defeat. But he still believed in the idea of a caliphate and the extreme ideology of the ISIS apocalyptic world view. He would rejoin it in a minute, he told me, if he had the opportunity.

The opportunity may be coming sooner than he or any of us had thought. With the precipitous US military withdrawal from Northern Syria, the chances of ISIS regrouping military has expanded exponentially. The Kurdish forces that had defeated them, imprisoning the militants and putting their families in detention camps, have been abandoned by the capricious decision of US President Donald Trump to summarily withdraw from the region. This allows for Turkish forces to move in, and to attack by air strikes without fear of US reprisals. Although the Kurds have quickly made alliance with the Russian-backed Syrian army it is unlikely that they will be able to provide the level of protection that the US military had supplied.

This means that the ISIS movement has a new lease of life. More than 800 former ISIS fighters escaped from the Ayn Issa camp in Northern Syria five days after the US troop withdrawal and the Turkish attacks began. About 10,000 ISIS fighters remain in camps in Kurdish-controlled areas of northern Syria, and the chances are good that many of them will escape as well.

Added to this problem is the matter of sleeper cells. These are groups of ISIS fighters who were not captured but have gone into hiding and are awaiting the opportunity to come out of the shadows and fight again. A number of new bombings and attacks in northern Syria indicate that many of these sleeper cells are now operating more openly. Coordination among them could lead to serious military operations and the possibility of retaking territory in ISIS’ name.

Across the border in Iraq, leaders of the Kurdish controlled region are nervous. When I was there earlier in the year, I was told that members of ISIS were still everywhere, including among refugees in camps, quietly organizing and waiting for the opportunity to rise up more openly. The signals from Syria indicate that that time may have come.

In an odd way, the US forces that helped to defeat ISIS have now provided the opportunity for its return.