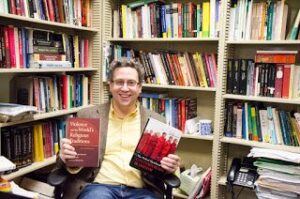 This was given as the eulogy at the memorial for Michael Jerryson at Youngstown State University on September 15, 2021

Michael Jerryson was not very successful….at being ordinary. He tried, but he was just not very good at it.

For example, he joined the Peace Corps after college. What could be more ordinary than that? He was stationed in Mongolia. There he just wanted to be an ordinary Peace Corps worker, out in the field helping with agriculture development projects and helping villagers improve their public health.

He did all that, which is the ordinary thing to do. But Michael’s mind kept working. He saw that Mongolian society was beginning to change, and the role of the Buddhist sangha, the monks, was taking on increased social and political power.

So in between his other Peace Corps tasks he studied the Buddhist sangha in Mongolia, and ended up publishing it as a book. That is not an ordinary thing to do in the Peace Corps.

He came to graduate school at the University of California at Santa Barbara. He just wanted to be an ordinary graduate student. But he kept winning scholarships and receiving awards for being the best teaching assistant. One of the undergraduate students in his classes told me that he was first attracted to Michael because he seemed such an ordinary guy, someone you could easily relate to. And he was. “But then,” the student added, “he changed my life. He opened my eyes in ways no teacher had done before.”

Michael was not an ordinary graduate student. He challenged his professors. I was one of them who soon realized that this guy was not just an ordinary student. He was a colleague. And we ended up co-editing three book projects together. That is not ordinary.

Michael’s research work was not ordinary either. Oh, he chose an ordinary subject—the role of peace making by Buddhist monks. What could be more ordinary than that? Everyone knows that Buddhism is nonviolent, the religion of peace.

So Michael went to Thailand to study the Buddhist monks and their role in peacemaking. He knew there was conflict at the southern border between Buddhist and Muslim groups, and Michael immediately went there to see what the monks were doing to bring about peace. That would be what you ordinarily expect.

But that’s not what Michael found. He discovered that the monks were not trying to bring peace but some had guns under their robes and they were joining the fight. So Michael changed his topic, and began to explore how even Buddhists could at times justify violence.

This is not the ordinary way of looking at Buddhism. But it showed that Buddhist people are in fact people, and like everyone else in the world they use their religion for good and at times to support conflict. Michael meant no disrespect towards Buddhism, a tradition that he greatly admired, but intellectual honesty led him to probe more deeply into the dark side of the tradition. It was not the ordinary approach; but it has made Michael internationally famous in the fields of Buddhist studies and of religion and violence. As I recently wrote about him, “after Michael Jerryson no one will look at Buddhism the same way.” This is not an ordinary scholarly impact on a field of studies.

Now whether Michael was an ordinary husband and father is not for me to say. But you can see the evidence before you—Fawn and Siena and Parker, this is not your ordinary family. Each is special, and has become so, I believe, in part because Michael has encouraged them to not just be ordinary.

The same can be said, I suspect, regarding his interaction with students and colleagues at YSU. You will hear from many of them in a moment. And what they will tell you, I think, is that Michael was not an ordinary professor and colleague.

He was not your ordinary obedient faculty member. Even before he received tenure he began pointing out to the administration the institutional injustices of the university. He fought for more equitable treatment of faculty and students, just as he has fought for equal justice in issues of gender, race, and sexuality. He has never been willing to accept the ordinary when human rights have been imperiled.

Michael, as my undergraduate student said, seemed like such an ordinary guy, so warm and friendly, full of humor and good common sense. So ordinary. And yet when you got to know him you discovered how much more than ordinary he could be.

Michael was able to transform institutions, just he has transformed his subjects and those around him at every stage of life he has lived. He had a Midas touch for social and personal transformation. What a guy.

So we remember Michael Jerryson. In all that he taught, in all that he studied, and in all the lives he touched, he made the ordinary extraordinary.