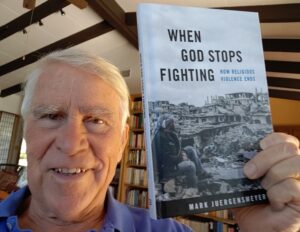 The “Page 99 Test” asserts that if you open any book to that page you will get the gist of what the book is about. A website devoted to this idea asked me if it applied to my latest book, and here’s what I told them.

If readers randomly opened my book to page 99 they might indeed get a pretty good sense of what the book is about. The book tries to understand how religious-related violent movements come to an end, viewed from those inside the movements.

The book looks at three case studies—ISIS in Iraq, the Moro movement for Muslim separatism in the Philippines, and the Sikh Khalistan movement in India. On page 99, I’m describing how support for the Sikh uprising began to erode among the Indian villagers who previously had tolerated it:

“Accompanying the increase in violence was a general collapse of law and order, especially in rural areas near the Pakistani border. The young activists had intimidated the older Sikh leaders, who became virtual pawns of the militants. The only authority in some areas came from those who ruled by gun at night. This was due in part to the erosion of idealism in the Sikh movement and in part to the movement’s exploitation by what amounted to street gangs and roving bands of thugs. In time, the Sikh movement had failed to achieve whatever political goals it might have espoused, including the dream of an independent Khalistan, leaving a cynical and demoralized public in its wake.”

As I go on to explain in the book, the loss of support from the public was one of several critical factors in bringing violent movements to a close. Another factor was in-fighting and loss of confidence in the leadership.

Outside factors made a difference as well. Prominent among these was a sense of hope, alternatives to fighting that provided careers for the militants and some concessions to the movements’ demands that would allow the leaders to save face and convince their followers it was all worth while.

The role of police and military was ambivalent. On one hand, it was necessary to have an authoritative show of force so that violent people could be restricted in what they could do and were brought to justice when they committed crimes. On the other hand, all-out attempts to crush the movements through military force often backfired and made the militants more defensive.

Sometimes a military victory over a movement was in fact a coup de grace for a movement that had already essentially destroyed itself from within. The military destruction of ISIS quarters in Raqqa and Mosul, for example, may have been the final blow to a movement that was already badly weakened by infighting and demoralization, according to some of the old militants whom I met.

Many of them continued to believe in the ideals of a Muslim caliphate and would join the movement if it rose again. But for now, they capitulated to the reality that their war was over and the movement had ended.