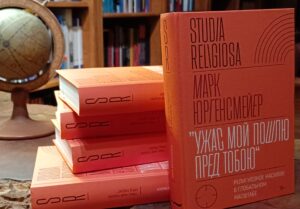 This the Preface to the Russian edition published  recently. It gave me the opportunity to summarize and update some of the ideas in the book.

In many cases the movements are responses to globalization—or the perception that distinctive national cultures are losing their identities in a sea of secularism. Each case has its own set of causes and characteristics, but a common theme is the loss of faith in secular nationalism. Religion provides a basis for movements to claim legitimacy in asserting political power and critiquing authorities.

In the five years since the publication of the fourth edition of this book, the edition on which this translation is based, there have been significant changes. The territorial control of the Islamic State has been largely defeated, though the movement still exists as a guerilla fighting band.  Movements of xenophobic and anti-immigrant protest have expanded in the Christian cultures of Europe and the United States. In America, right-wing militant movements have become the major terrorist threat.

Other forms of religious-based violence have been perpetrated by state authorities. In general this kind of state terrorism is not covered in this book. It is a real phenomenon, however, and one related to movements of religious activism. The dismissive treatment of Uyghurs in China and the virtual genocide of Rohingya Muslims in Myanmar are examples of the violence that states are capable of supporting or implicitly allowing to occur. The cases in this book, however, focus on non-state movements of antiauthoritarian protest.

The cases in this book also do not include movements that are secular or non-religiously nationalist. In Europe movements of neo-Nazism have emerged, hostile to multicultural societies formed by new patterns of immigration, especially from Muslim countries. In the United States, similar movements of right-wing nationalism are fiercely patriotic but often have few religious elements in them. While these movements are significant and often motivated by the same concerns that gave rise to religious-related movements, this book looks solely at the religious ones.

The purpose of this book is to try to understand the global phenomenon of religious violence in recent decades. It attempts to answer two basic questions: what does religion have to do with violent movements? And why are they happening now?

The answer to the first question is linked to the ability of religion to provide legitimation to alternative bases of political power. Religious leaders and texts can give moral credibility to movements of protest and provide symbols of empowerment. Perhaps no image from religious traditions is a more powerful resource than the idea of cosmic war. This notion, taken from the great wars depicted in religious texts, implies that some forms of warfare are not just between quarreling parties but between fundamental forces of existence—between right and wrong, religion and irreligion, order and chaos. If you believe that your struggle is God’s war, it is greatly empowering.

The answer to the second question regarding why these movements are occurring in recent years is related to the questioning of authority that comes with globalization. As regimes find themselves weakened through assaults on national identity and social control, movements based on religious authority rise up to challenge their very legitimacy. Hence it is no surprise that in this moment of global change all regions of the world are feeling the strains of social disruption. And in many cases, angry religious-based movements of resentment emerge.

This book explores the diversity of these new movements of challenge and change, and the incidents of violence that they have created. It is not meant to be comprehensive. There are many more movements and events that could have been included. Africa, for example, has witnessed the rise of movements such as Boko Haram and the Lord’s Resistance Army—a Muslim movement related to the Islamic State and a Christian militia. This book could have included those and many others, and in doing so easily expanded to two volumes, and perhaps a whole library, to cover the many forms of strident religious activism in the current age.

Still, this book tries to accomplish in a limited way the objective of showing that religious violence has erupted in public life throughout the world, in every religious tradition. There is no religion that is more prone to violence than others. Islam is not more violent by nature than, say, Christianity. And there is no religion that is so nonviolent by nature that it is devoid of examples of violent activism. Even Buddhist societies have had their violent religious aspects. Contemporary religious violence is truly global.

Will these movements last forever? I am sometimes asked whether this period in world history is a momentary eruption of social discord or whether these forms of unrest are here to stay. My answer is that specific movements rise and fall. Often they last no more than a few years. They are not able to carry the weight of their heady expectations of religious and social transformation, and their organizations often flounder in corruption and the infighting of internal  power struggles. Yet the larger issue of the erosion of confidence in secular nationalism is a matter that may be with us for some time. The trends that produce it—demographic shifts and transnational economic and social changes—will continue to challenge nation-states in ways that conduce to movements of neo-nationalism and opposition. Some of these will rely on religion for their legitimation.

The story of the rise of religious violence is therefore ongoing. The final chapters are yet to be written. My hope is that the ideas in this book and the perspectives that it brings to analyzing this phenomenon will continue to be useful in understanding new and continuing forms of religious violence in the years to come.