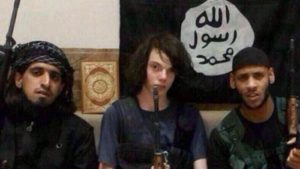 A former ISIS fighter told me how they wooed and recruited new fighters into the ranks of the Islamic State movement. I had a long conversation with the tall 29-year old Mohammad after he had been captured and was held in a prison in northern Iraq, and though he was still committed to the Caliphate and the apocalyptic jihadi world view of al Qaeda and ISIS, he was now able to reflect on his role in the movement. Among other things, he explained the initiation process–how they would infiltrate into a group of young men and slowly bring them to the jihadi cause.

It all boiled down to three T’s, he told me. In Arabic, the three words were تمسكن tammaskan, تمكن tammakan, and تفرعن tafar’aan. Each of these described a stage in the developing involvement of a young man targeted for recruitment into the jihadi movement.

The first T, tammaskan, which means to “stick by” someone, to embrace him in an intimate friendship. Mohammad explained that they would usually target a younger man who might be flattered by the friendship of an older more active man. The target would usually be someone in his late teens who was searching for meaning and a role in life. The ISIS recruit would befriend him and only occasionally discuss religious and political matters.

The second T, tammakan, “control,” referred to the next stage of recruitment. After a period of friendship the older man would exert more leadership and take an authoritative relationship to the younger man. He would become more directive in telling him where he had gone wrong in life and what to do about it. The conversation about religion and politics would become explicit, with the clear implication that the young man should learn from these pronouncements.

The third T, tafar’aan, means “act like a Pharoah,” or enslaving. After it had become clear that the young man was responding to the authoritative relationship with the ISIS recruiter, he was ready to be made captive to the ISIS cause. In some cases there would be a kind of initiation, a recognition that the young man was now ready to take on a role in an important cause and become a servant in a secret circle of friendship.

Mohammad himself had gone through these stages of recruitment when he was a fifteen year old teenager in the town of Mosul. It was several years after the US invasion and occupation of Iraq which had severe repercussions on his Arab Sunni family. They had prospered under Saddam’s regime and now the family was poor and marginalized. For young Mohammad, the friendship and the cause of the jihadi movement then known as al Qaeda in Iraq was something of a salvation.

Some years later when al Qaeda in Iraq became the Islamic State, Mohammad saw new generations of young fighters being recruited into the ranks in the same way that he had been wooed and inspired. The recruiters invariably followed the three T’s. They befriended, controlled, and ultimately enslaved them.

My thanks to Shahid Burhan Hadi for his arrangements and translation assistance when I was in Iraq in March 2019, and to the support of the Resolving Jihadist Conflicts Project of Uppsala University, directed by Isak Svensson.