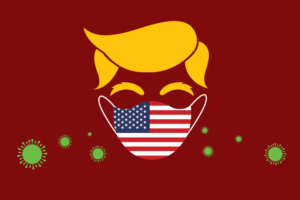 These comments were posted on the International Relations -e website on May 2, 2021.

The American populist president, Donald Trump, came to his downfall largely due to the ineptitude of his administration’s ability to handle, or perhaps more correctly, mishandle the country’s response to the covid pandemic. What angered voters was not just his apparent inability to take the situation seriously, but also his cheerful optimism that consistently belied the facts of the growing crisis.

In the beginning months of the pandemic crisis, Trump assured the American public that the disease was no worse than the common flu, and that it would quickly vanish away. When it didn’t, rather than double down on mitigating factors that might control it, he consistently promised that things were getting better. In September 2020, at an election rally in North Carolina when he stood maskless before a packed and largely mask-free crowd, he proclaimed that “we’re rounding the corner of the pandemic.” Unfortunately for him, the crisis was simply getting worse.

That is a problem with populists. They gain their following by weaving hopeful though often fictitious images of the future, and promoting vaunted characterizations of their ability to handle crises. This was the peril of America’s Trump, and to some extent also of Turkey’s Erdogan, Brazil’s Bolsanaro, the UK’s Boris Johnson, the Philippine’s Duterte, and India’s Modi.

Narendra Modi seems to have followed the same covid play-book of Donald Trump. Early on he downplayed its seriousness. As recently as March 2021, as the recent rise of cases began to spiral precipitously, he was claiming that India would serve as “the world’s pharmacy,” now that the pandemic was, he implied, well under control. Ignoring the disturbing spike in cases, his government allowed the massive kumbh mela gathering in April on the banks of the Ganges river at Haridwar. Modi himself traveled to Bengal to appear maskless before crowds in that state’s election campaigns.

Only when the world’s media began to spotlight the growing covid catastrophe in the nation did Modi return to warn of a covid virus “storm” overtaking the country and vowing to increase production of oxygen tanks and other needed supplies. He also faced a storm of criticism of his inattentiveness to the seriousness of the crisis. Like Trump, his popularity plunged in relationship to his handling of the situation.

Modi is not Trump, however, and the politics of India is not the same as in the United States. Trump’s popularity poll numbers were never higher than his unpopularity ones, while Modi has consistently stayed a well-liked politician. Despite the current critique of Modi’s command of this crisis, the likelihood is that he will politically survive.

Still, the current disillusionment over his persistent optimism is characteristic of how populist leaders around the world are vulnerable. The era of globalization has helped to produce such leaders, and global crises can greatly diminish or even undo them.

In the last thirty years, the rise of globalization has been a challenge to the artifact of the nation-state and to the nationalism that sustains it. In a world of global economics—when everything is made everywhere—and global media and demographic shifts, the legitimacy of the nation-state has been called into question. One way of shoring up the idea of the nation is through a fierce nationalism. These neo-nationalisms are often based on ethnic or religious homogeneity and stoked by the fiery rhetoric of strong politicians.

The illusion of strength is a large part of their success. Like Trump, they never admit a mistake and never concede to failure. They are boundlessly optimistic and self-assured about their abilities to solve any problem, even the most intractable ones. During the 2016 Republican convention that nominated Trump for the presidency, he listed America’s difficulties and confidently proclaimed, “I alone can fix them.”

Though there is no evidence that Trump fixed any of these problems is beside the point. His followers were spirited by the fact that he appeared to have the supreme confidence to solve them. Moreover, his only somewhat muted messages of White supremacy gave them the assurance that he was on their side in the racial and cultural wars in contemporary globalized society, and that he would “make America great again,” in an image that many felt would privilege them.

This is a familiar message of neo-nationalist populist leaders around the world who appeal to an ethnic and religious base in their constituency, including America’s Trump, Turkey’s Erdogan and to some extent India’s Modi. They offer a positive unified image to counter the more complicated one of a multicultural global world, and these visions have a powerful political appeal. Alas they do not stand up so well when crises emerge, often global in scope, that rip the cover off of the cheerful optimism of populist leaders.