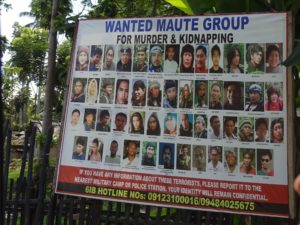 “Do you still believe in the peace process?” a teenage boy asked cynically. He was accosting a former Muslim militant in the Southern Philippine province of Mindanao, who related this story to me when I was recently in the main town of the region, Cotabato City. The former militant had become a lawyer, and though he renounced violence he was still a member of the separatist movement, the Moro Islamic Liberation Front. So he still considered himself an activist, but to the teenager, the son of one his friends, he was not activist enough.

“What peace process is there?” the young man hissed at the lawyer in what was more a judgement than a question. And then he added, “look at Marawi.”

For over six months from May to November 2017, the Philippine army attacked the city of Marawi, just north of Cotabato City, in an effort to destroy an ISIS-affiliated group of militants who had taken the city for ransom. Two militant forces, Abu Sayyaf and the Maute Brothers Group, had joined forces under the banner of ISIS and were making a stand by taking over the central mosque and adjacent buildings in the center of the city. In the ensuing battle, Marawi was destroyed and many, including the teenager, blamed the army for the destruction, rather than ISIS.

Days after the conversation, the lawyer told me, the boy disappeared. His family feared that he had joined the ISIS-affiliated rebels. The lawyer blamed himself for not doing more to try to persuade the young man that the peace process between the Muslim separatists and the Philippine government was still worthwhile.

“But would you have listened to this when you were his age?” I asked him, knowing about his past. He had joined the most militant branch of the separatist movement when he was in college and for years he was wrapped up in spirit of confrontation with the Philippine government. He was engaged in a cosmic war of absolute enemies that led to violent conflicts, guerrilla war, and a fifteen-year trail of bloodshed.

The lawyer smiled at my question, and then began telling me the story of how he began to change his point of view. In time he began to see the negotiations with the government as trustworthy.

“How did that happen?” I asked him. How did he turn from thinking in terms of cosmic war to civil engagement that could lead to a peace agreement?

When he was in college, he said, studying at Mindanao State University in Marawi, recruiters came to campus to tell Muslim students about the oppression against Muslims around the world. At that time, in 1992, it was the conflict in Bosnia that attracted global attention, and he volunteered to join the struggle. As luck would have it, the recruiter failed to show up at the appointed time, so the lawyer never ended up going to Bosnia, where, he said, he likely would have been killed.

Instead, he said, he joined the Muslim separatist movement at home. He was at first attracted to the Moro National Liberation Front, but when a new and more strident movement was formed, he joined this movement instead–the Moro Islamic Liberation Front. What attracted him about the movement, he said, was that it was more militant and more directly religious in its ideology. It also appealed especially to people from his area of central Mindanao, so he felt that he was fighting in a struggle for his own community.

It was a life and death struggle, he said. When he was young and most active in the movement, he said that he was willing to die and to kill on behalf of movement. He saw himself as a soldier in a war, a conflict of absolute right versus absolute wrong, against an enemy that did not deserve to live.

I asked him what changed, how he began to see the situation differently. He did not change his basic attitude about the need for self-government for Musim Mindanao, he said, and he continues to be a leader in the Moro Islamic Liberation Front to this day. He is one of its leading thinkers and a negotiator in the peace process with the Philippine government.

Two things changed his attitude towards violence, he told me. One was simply the domestic demands of life later in his 20s as he got married, began to raise a family, and was busy with law school and an emerging career as a lawyer. Though not a combatant at this time, his basic outlook had not changed. He was still emotionally at war with the Philippine state.

This view changed after he met a remarkable leader, Brigadier General Victor Corpus, a Philippine army official who had defected from the army and joined the Communist militants who were fighting the Philippine government early in the 1970s. In 1976, however, he soured on the Communist insurrection and surrendered to the army. After a period of prison detention, he was allowed to rejoin the army. Hence when the lawyer met him in Mindanao the general could speak to him and other militant Muslim separatist leaders with the credibility of a former militant who had been reformed.

He understood us, the lawyer said. He could see how we would mistrust the government and want to embrace a new way of looking at politics. Yet he also was realistic. He could explain the futility of guerrilla warfare, and he told us how many of our goals could be met by negotiating a settlement with government officials.

When the lawyer and other Muslim separatist leaders accepted General Corpus’ offer to meet with government officials, the lawyer said he was surprised at how sensitive they were to the Muslim separatists concerns. “They treated us with respect,” he said.

This attitude of respect threw him off guard. It made it difficult to see the other side as the evil enemy that deserved to be killed, and the image of intractable absolute war began to dissolve.

A somewhat similar story was related to me by a general in the militant Muslim forces. When I talked with him recently in Cotabato City, he was still nominally the head of the combat forces of the Moro Islamic Liberation Front in the region. These days, however, his main role was to be the spokesperson for the militants in the joint militant-government organization, the Coordinating Committee for the Cessation of Hostilities, which is a key component of the peace process.

The militant general told me that several years ago when the leaders of the Moro Islamic Liberation Front told him that they were going to stop fighting the government and begin to negotiate with them, he couldn’t believe it. “We didn’t trust them,” he said.

Still, he obediently followed the orders of his militant leaders. But for a year, he said, he had difficulty sleeping at night. He was constantly on edge, not knowing whether the negotiations would suddenly break off, and again they would be in a war mode. He was emotionally prepared for that possibility.

In time, however, his attitude changed. What made a difference, again, was respect. He felt that the government negotiators were genuinely concerned about the Muslim concerns, and trying to come to an agreement that would benefit them within the framework of the existing structure. He now says that it is too late to turn back. He is committed to a peaceful resolution.

Even so, however, the general says he understands the hot-headedness of the young people who are frustrated with the slow pace of the peace process. After the ISIS-army conflict that destroyed the nearby town of Marawi, he thinks that many young people will join the extreme militant side. He said that many already have.

For this reason, the mainstream Moro Islamic Liberation Front has tried to use counter measures. Accompanying the former general when we met in Cotabato City was a young college-age man who had joined the Liberation Front with the explicit task of trying to talk down his fellow young Muslim militants and keep them from joining ISIS.

“I try to talk to them about the future,” he said. He pointed out that Muslim morality does not sanction indiscriminate killing. He told them that defending the community is better carried out by negotiations rather than militant confrontations that often end in even more violence against the community, as it did in the case of the destruction of the town of Marawi. He also talked about the individuals’ own future, and how they could be more effective leaders as spokesmen for the community rather than as soldiers in a fruitless suicide struggle.

I asked him whether he had persuaded anyone. “Some,” he said quietly. He went on to say that he was engaging in these conversations not just for the sake of the goals of the Liberation Front, but also as attempts to save their lives.

The sad truth is that many of the brave warriors never return. Alas, it was a message that did not arrive soon enough, or was not heeded, by the teenager who challenged the formerly militant Muslim lawyer to abandon the peace process. Though the teenager has disappeared from view, his fate is still unknown.

Hospitality and arrangements for my recent visit to Mindanao were provided by Fr Francis Zabala OMI, President of Notre Dame University, Cotabato City, and the Vice-President for Administration, Sheila Algabre; research support came from the Resolving Jihadist Conflicts Project at Uppsala University.