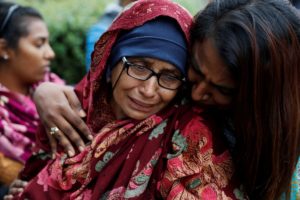 Was the New Zealand terrorist attack committed by a “lone wolf? “The recent attack on two mosques in Christchurch, New Zealand by a 28-year old white extremist, Brenton Tarrant, killing fifty innocent worshipers in the midst of their weekly prayers, raises the question of how to describe it. Was it a hate crime or an act of terrorism, or both? And if it was terrorism, was it part of an organized conspiracy or was it simply the act of a crazed individual—the so-called “lone wolf” terrorist?

Much of the news media and many politicians have quickly asserted that if it was terrorism, it was of the “lone wolf” type since Tarrant apparently acted alone with no connection with or active support from any organized group. This implies that we need not trouble ourselves with looking at the wider background, for this was simply a crazy act that could happen anywhere at any time for any reason. It also implies that there was no larger movement or audience to whom the killer was related, and for whom the act was intended to impress.

Yet this description is woefully inadequate to describe the New Zealand massacre, which was clearly meant to intimidate people—the basic definition of terrorism—and the racist apartheid patches on Tarrant’s jacket in his Facebook photo indicates that he identified with and wanted to impress other right-wing racists around the world, so he is hardly a lone wolf. Nor does the “lone wolf” characterization fit many of the other individual terrorist attacks in recent years.

In 2018 the vicious assault on a Jewish synagogue in Pittsburgh by Robert Gregory Bowers was characterized as an act of “lone wolf” terrorism. So was the 2015 massacre in a Charleston church by 21-year old white supremacist Dylann Roof and earlier that year the assault on the headquarters of a satirical magazine in Paris, Charlie Hebdo, by two Algerian brothers, Said and Cherif Kouachi. Before that, there was the 2013 Tsarnaev brothers’ attack on the Boston marathon, the deadly assault on a Norwegian youth camp by Christian extremist Anders Breivik in 2011, the August 2012 attack on the Milwaukee Sikh Gurdwara by Wade Michael Page, the 2010 Times Square bombing attempt by Faisal Shahzad, and even earlier, the 1996 Atlanta Olympic park by Eric Robert Rudolph and the 1995 Oklahoma City Federal Building bombing by Timothy McVeigh.

Some of these were committed by Christians, some by Muslims, and some by those with no particular religious affiliation at all. Some had racist ideologies in mind, others were simply raging against society. In almost all cases, though, these have been instances where alienated individuals have struck back at a society that they thought had abandoned them. And they perpetrated their attacks in a way meant to impress a specific audience.

This is the most basic definition of terrorism, a public act of violence meant to be intimidating. What makes the terrorism of recent decades so striking is that they are seldom undertaken for strategic purposes—to gain territory or make demands—but are rather done for symbolic reasons. They are acts of violent meant to give the illusion of power, to intimidate one group of people and impress another.

Hence terrorist acts can be described as “performance violence.” A performance is done for an audience, or multiple audiences, to intimidate and impress. It makes no difference if someone like Tarrant or Breivik was a member of an organized extremist network or not; they were clearly trying to impress their imagined community of support, their White nationalist kinfolk, and to intimidate multiculturalists and Muslims into compliance with the idea of a society dominated by white Christians.

The comparison between Tarrant and the Norwegian terrorist Andres Breivik is relevant for a number of reasons. Like Breivik, Tarrant was part of a wider subculture of hatred. He likely thought of himself not as a terrorist but as a soldier in a great and hidden war, carrying out a mission on behalf of an imagined constituency of supporters. Like Breivik, he dressed up in military garb with militant patches—in Tarrant’s case he wore the symbol of a far-right nationalist group in Ukraine. As in the computer war games that are popular in his generation, Tarrant thought of himself as a warrior in a secret war. He even credited the computer game, Fortnite, for training him how to kill. One of Tarrant’s friends said that Tarrant had told him prior to the killings that he wanted to start a race war. This sense of mission would help to explain why Tarrant, like Breivik, thought of himself on a secret mission in an act of what he regarded as virtuous warfare and what we see as hideous terrorism. Like Breivik, Tarrant never showed remorse for conducting what he thought was a soldier’s duty in a grand, invisible cosmic war.

Then there is the matter of the message, one implicitly transmitted in the terrorist act itself, the other explicitly conveyed through a manifesto. Like Breivik, whom Tarrant openly acknowledged as a role model, Tarrant published on the Internet his own eighty-page written defense of his horrible deeds. Written in a question and answer format as if he was of sufficient importance to be interviewed by the news media, Tarrant’s manifesto winds through a twisted rambling set of comments and memes expressing Islamophobia, hatred of immigrants, and a strident right-wing nationalism. Impervious to irony, the Australian Tarrant –himself a foreigner writing in New Zealand—demands that outsiders be forcibly removed. He shows admiration for the nationalist stance of US President Donald Trump and like Breivik expects that his right-wing comrades will take a cue from his actions and his stance and rise up against Muslim and other non-white immigrants in their countries.

So it makes no difference whether or not Tarrant or Breivik were card-carrying members of racist organizations. They thought that they were part of a great social struggle in which their acts would receive approval and their roles respected as if they had been triumphant warriors. The white racist subculture of neo-nationalism around the world from the US and Europe through the Middle East, Asia, Australia and New Zealand have provided just such a social context. Despite the acceptance of multiculturalism by most people as a normal and interesting way of living in the wake of the dramatic demographic shifts in this era of globalization—or perhaps in an ugly reaction to the multiculturalism of global societies–racism and right-wing nationalism around the world are flourishing.

These communities of extreme nationalism that are punctuated with strident voices of hatred have given context and support for Tarrant’s act. Far from being a “lone wolf,” therefore, the perpetrator of the New Zealand massacre was not isolated. This terrible event was part of a sad, established pattern of xenophobic nationalism and white Christian terrorism that is as global as it is destructive.

This essay includes observations that I have made in other essays about a variety of acts of supposedly “lone wolf” terrorism in recent years.