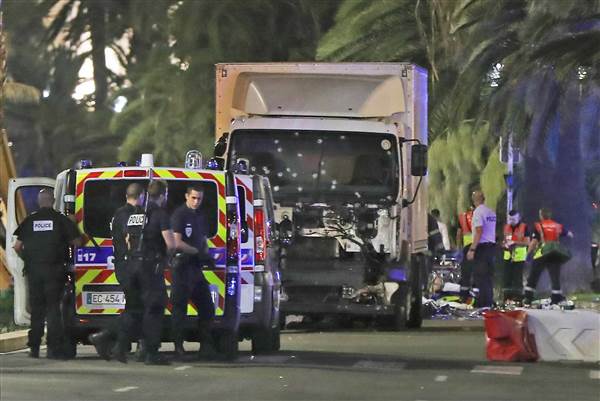 “He was more into women than religion,” remarked one of the neighbors of Mohamed Lahouaiej-Bouhlel, when asked about the driver of the rented truck that plowed into a celebratory crowd watching fireworks on the beach of the French Riviera city of Nice, killing more than 80 persons.

“He didn’t pray, and liked girls and salsa,” the neighbor continued, according to a press report in the British newspaper, The Independent. Lahouaiej-Bouhlel, a French citizen who lived in a town near Nice, had been convicted of petty theft on several occasions, and was never seen in a mosque, according to other informants.

But Lahouaiej-Bouhlel did have reasons to be angry at the world. He was recently divorced and fiercely critical of his former wife. He had difficulty holding a job as a delivery truck driver after having been convicted of falling asleep at the wheel. He was a member of an immigrant community of North Africans who have often felt marginalized in France.

At first glance, then, this would appear to be another case in which an angry and depressed person takes out his hostility (and it is invariably a “he”) in a violent way. Lahouaiej-Bouhlel joins the sad list of crazed attackers that includes the killers at the Columbine and Sandy Hook schools.

On the other hand, he was ethnically a Muslim, which automatically convicts him in some simplistic minds. And he is said to have shouted “Allahu Akbar” (“God is great”) before the police opened fire on him at the end of his murderous rampage. This phrase, however, is somewhat like the English language expression, “Lord of mercy,” that can be expressed by anyone in a moment of travail regardless of the degree of their religiosity.

More interesting, the online community of ISIS supporters were quick to adopt him as their own. According to my research assistants who have been following jihadi-related Twitter feeds, there was online cheering minutes after the act. When the attacker’s identity was revealed, one tweet stated that Lahouaiej-Bouhlel must have been “a lone wolf that answered the call of jihad by attacking the kuffars (“blasphemers”).” Others conjectured that he had served as a jihadist in Syria before returning to France to commit the act.

No evidence has yet surfaced that would support these rumors. ISIS has not officially taken credit for what Lahouaiej-Bouhlel did. In the past they have praised individual acts that appeared to have been inspired by its ideology, such as the San Bernardino shootings, even if they were not directed by its organization. Initially after the Nice attack, however, ISIS was silent.

But the lack of clear connection between Lahouaiej-Bouhlel and ISIS has not deterred some politicians in France and the United States from capitalizing on the incident for their own ideological purposes, and branding it an ISIS act. Media commentators have also rushed to assume that it is ISIS-related.

Some of the ISIS followers have labeled it the same way. Why would ISIS followers want to be identified with a violent act that was not directed by their own movement?

Given the current situation where ISIS is rapidly losing territorial ground and international volunteer support for its cause, it needs these acts of terrorist violence—in Baghdad, Dacca, Istanbul, Paris, Brussels, and Orlando—to shore up its credibility as a global player and give the illusion of power. Its followers are taking credit for anything that might be construed as an ISIS-related assault.

Branding a terrorist act has become as important as what motivates it. Even if it turns out that Lahouaiej-Bouhlel did in fact have some jihadi connections, the initial evidence is that his motivations were largely personal rather than ideological. Like the Orlando shooter, however, he might have wanted to brand his actions as ISIS-related in order to give a degree of legitimacy to his actions. And ISIS followers were equally eager to give it their label. In terrorism, as in many other aspects of public life, branding is everything.

Thanks to my research assistant, Mufid Taha, for the Twitter quotes, and to the research support of the “Ending Jihadist Conflicts Project” at Uppsala University.