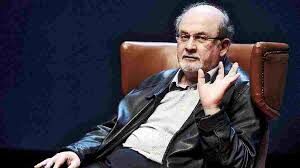 Several years ago I happened to sit next to Salman Rushdie at dinner when he was at UC-Santa Barbara to give a talk. I asked him why he didn’t have any security guards around him.

“I have to live my life,” Rushdie answered. And after nine years of living in hiding under the pseudonym of Joseph Anton (Joseph for Joseph Conrad and Anton for Anton Chekhov, two of his favorite authors), it is understandable that he would want to celebrate his freedom. He moved to the US to do that– America supposedly is, after all, the land of the free and the brave.

But the fatwa remained. It had been proclaimed by the Ayatollah Khomeini in 1989 and ignored by the Iranian state in recent years. But it had never been retracted. Finally, it seemed, someone had carried it out. On August 12, at the historical Chautauqua Institution in upstate New York, a young man leapt on the stage and stabbed the novelist ten times, seriously injuring him.

But why? The alleged attacker, Hadi Matar, was an American who was born in California and was living in New Jersey at the time of the attack. He came from a Lebanese family, and at age 24 he was born years after the original fatwa was proclaimed. It is surprising that he even knew about it, much less motivated to do something about it.

There were a few hints, however, that Matar was becoming more involved in radical Islamist circles. His mother said he abandoned his academic studies to focus on religious education. In 2018 he traveled back to his father’s village in southern Lebanon, a stronghold of the Shi’a Muslim movement, Hezbollah, and his mother claimed that this trip transformed him. I remember traveling through that region some years ago and being impressed with the many banners and posters portraying the Ayatollah Khomeini and other Iranian Shi’a leaders.

Yet even if he was enthralled with a politically extreme Shi’a Muslim position, there were many other imagined foes of Iran who could be targeted. It is not clear why Matar would see Salman Rushdie as the one to get. Some reports claim that Matar had been in contact with members of the Quds Force, Iran’s Revolutionary Guard, who might have given him specific instructions to attack the novelist. A similar operation by the Revolutionary Guard focusing on the former US national security advisor, John Bolton, as the proposed target was recently intercepted and the murder-for-hire figure was arrested.

Like the planned Bolton attacker, Matar could have been paid by the Revolutionary Guard to undertake his action. Or he might have done it gratis to impress them and receive what he imagined would be accolades from the Shi’a community.

Still, it was a daring act, especially for someone described by those who knew him as a shy loner. Why would he undertake such a risky operation that provided no easy escape, and that almost certainly would result in his injury, death, and/or a long period of incarceration?

What we know about Matar replicates the story of the Tsarnaev brothers who were convicted of terrorism in the Boston marathon bombings in 2013. The older brother especially was something of a loser, having failed at every attempt he made to succeed. In Matar’s case, he also had failed academically and was working at a Marshall’s clothing store in a job that did not inspire him. In the off-hours he worked out at a gym and was trying to learn how to box, though some of the other regulars at the boxing gym said he was not very good at it.

What did inspire him, apparently, was the lure of a great adventure. He was swept up in the scenario of a grand imagined battle between the forces of good and evil, where he had the opportunity of becoming a hero. He could enter into the fray and slay a demonic being and receive the applause of the faithful.

It was an imagined war not unlike the one that Ashli Babbitt thought she was fighting when she joined the insurrection that seized the United States capitol on January 6, 2021. In that moment prior to her death she was exhilarated to be a part of what she thought was a conquering army. Like Matar and the Tsarnaev brothers, she was willing to risk martyrdom for what she believed was a righteous war.

These are tragic illusions. They are double tragedies, in fact, for the victims are both the targets and the perpetrators of the attacks. Yet their assaults are not the actions of lone wolves. In their moments of glory they imagine themselves to be cheered by thousands of sympathizers who like them believe they are living in an age of cosmic wars.

But the costs of their illusions are massive. They are payments of irreparable damage that affect us all.