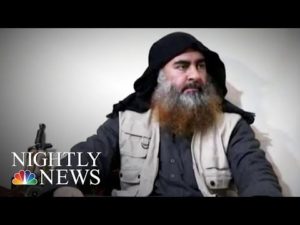 ISIS will do just fine.

Shortly after the capture and apparent death of Abu Bakr al Baghdadi, Caliph of the Islamic State, was announced on television, commentators were quick to observe that this will probably not end the movement. They are right.

There are three reasons why this is the case. Based on my meetings with ISIS supporters and former militants in the movement earlier this year in the Kurdistan region of northern Iraq, I am convinced that his death will not deter the more ardent members of the movement.

Quite the contrary. It may accelerate the violence. Here are the reasons:

Despite the undignified crowing of the US President Donald Trump that Baghdadi went “whimpering” and “died like a dog,” the ISIS network will report this quite differently. The fact is that Baghdadi, when cornered, took his own life.

This is precisely what the ISIS militants are taught to do. They are expected to die gloriously in battle, either by carrying out an attack mission, or if caught, to take their own life.

Baghdadi ignited the suicide vest that he has kept on his body for years. Some say that he even slept with it on. He fully expected that the time would come when the choice would be capture or death by suicide, and he was prepared to die.

For this reason, he will instantly be regarded as a martyr within the movement. For those who had complained about the ISIS leadership and felt that Baghdadi was only trying to protect himself, he will be vindicated. He died a martyr’s death.

Baghdadi was not essential to the leadership

Unlike al Qaeda, the organizational structure of ISIS has always been fairly decentralized. Decision making power is given to decentralized units of the movement. Baghdadi was paranoid about digital communication being intecepted and never used a cell phone or any electronic device. Communications were by human courier, which meant that they were slow and infrequent, thus requiring a decentralized form of organization.

On a global scale, where groups from Nigeria to the Philippines are claiming allegiance to ISIS, there is virtually no direction from ISIS central command. So the absence of a central leader will scarcely be noticed.

Moreover, since the fall of Raqqa there has been no obvious central command. The movement has been fending for itself, and the sporadic acts of terrorism are planned and conducted by local cells and individual actors.

There is no reason to think that any of these local operations will be curtailed by Baghdadi’s death. In fact the glorification of him as a martyr might be a new rallying point for members of the movement.

When I talked with former ISIS militants who were convicted and in prison in Iraq, some told me that they had already been disillusioned with the ISIS leadership. They thought it was incompetent and self serving. They still believed strongly in the idea of a caliphate, however, and would fight for one if they were convinced the leadership was more deserving.

A new leader of ISIS will soon be anointed. He may take on the mantle of caliph. Whether or not he does, he will have the opportunity to provide new energy and momentum to the movement. So Baghdadi’s death might become a stimulus to ISIS revival.

The death of Baghdadi might give the illusion that the movement itself is dead. This would be huge mistake, since it might deflect attention away from surveillance and engagement with the movement.

Already the capricious decision to remove US troops from northern Syria and cease air support for the region has been a catastrophe for the Syrian Kurds. These are precisely the fighters who have defeated ISIS in the region, with US assistance (not the other way around).

It is bittersweet irony that the capture of Baghdadi was once again a victory for the Syrian Kurds. Immediately after the attack their leader sent out a tweet to members of the Kurdish organization congratulating them on their achievement.

In an embarrassing acknowledgement, US President Trump scarcely mentioned the importance of the Kurdish troops in the operation. He thanked Russia, Syria, and Turkey, even though they had little to do with the operation—the Russian defense ministry even denied providing air space permission. Trump then also said that the Kurdish troops “helped,” whereas in fact they made the raid possible.

The killing of Baghdadi might also be the last major act of collaboration between US military and Kurdish forces. If so, it leaves a huge swath of territory in northern Syria vulnerable to the rise of ISIS.

The location where Baghdadi was discovered is an area controlled by jihadi groups that have not been ISIS-related in the past. There is speculation that by allowing Baghdadi safe harbor there, the jihadi movements were joining forces. If so, it is a huge mistake to withdraw support from the one group shown to be effective in fighting them—the Kurdish forces.

Years ago the Israeli military made a huge mistake in thinking that if they killed the leader of the movement, Sheik Ahmed Yassin, they would kill the movement itself. Quite the contrary, the martyrdom of Yassin gave new life to the movement, and today Hamas still controls the region of Gaza as a result. Al Qaeda has survived after bin Ladin, and it is almost certain that ISIS will survive the death of Baghdadi as well.