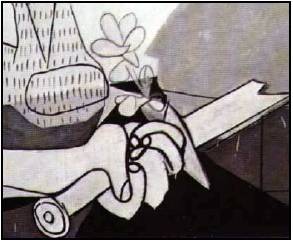 Introduction to God at War, to be published by Oxford Univ Press. The picture is a detail from Picasso’s Guernica.

“This is war,” the sad Filipino man said to himself as we looked across the river at the town of Marawi. Only weeks earlier, in a five-month siege in the last half of 2017, it been flattened by a military attempt to rid the city of an ISIS-affiliated Muslim separatist movement. As we viewed it across the river, the city still lay in ruins, baring the scars of battle.

His comment startled me. Though I also was dismayed to see the extent of the destruction, I knew that there was some controversy over who was responsible, who started it, and whether the military assault was justified. Just as the cities of Mosul and Raqqa were decimated in the efforts to free the evil grip of the Islamic State of Iraq and Syria in those countries, this effort to drive out ISIS rebels in the Philippine state of Mindanao resulted in the cities being turned into rubble. The liberating armies had to destroy the cities in order to save them.

I agreed that these were heavy handed military operations. They might also have been misguided. But were they war? My Filipino companion repeated the phrase quietly, as if stating the obvious. What did he mean by that, and what did he see that I didn’t?

I didn’t live in Marawi, of course. But he did. His family home was in the midst of the inner city and he lived through months of bombs and social dislocation. Now he was facing the specter of a ruined city across the river.

“There’s nothing left,” he told me, showing videos of what was left of his family home taken several days earlier on his cell phone. He was right—I could see only a pile of brick and stone rubble where once a multi-story had proudly stood.

“My mother built that home with her sweat and toil,” he said sadly. She had worked for years as a domestic housekeeper in Saudi Arabia, carefully sending the earnings back to her family in the Philippines. Part of the money was for their college education. The rest was for the house in Marawi.

Though he had been mildly sympathetic with the Muslim separatist movement in Mindanao before, he told me, his attitude had changed after the fighting. He knew now that they were in a state of war.

War—what a remarkable notion. As my Filipino companion told me, it enabled him to see everything differently. He saw the world through new eyes. He could no longer trust the government to do what was right; he now saw them as an enemy that was beyond redemption. One could only fight and attempt to conquer them in a scenario of struggle that engulfed every aspect of the social world around him.

It is a strange way of thinking, this idea of war. It turns the world upside down. It creates demonic enemies out of competitors, and brings normal civil activity to a halt. It animates ordinary people into a state of action, allowing them to kill and be killed, and cheer when the enemy—whose lives may not be all that much different than theirs, men and women with families and duties and dreams—is destroyed, sometimes viciously so.

Yet history is full of war. Perhaps more perplexing, religion is full of it. Human creativity in general revels in it. It saturates the images of popular culture—the plays and movies, novels and television stories, comic books and computer games. It is the prevailing image in the minds of those who have undertaken acts of terrorism in recent years. And it is the idea that animates those have launched their own wars on terrorism against it.

It is a powerful notion, war, and a puzzling one. For decades I have been studying the rise of religious violence around the world, including groups like ISIS and Christian militias that have been involved in acts of terrorism. Invariably war is central. All of the activists with whom I have spoken eventually get around to the subject.

“Mr. Mark, there’s a war going on,” I was told by a jihadi militant who was imprisoned for his role in the 1993 bombing of the World Trade Center. “We’re at war,” a Buddhist monk in Myanmar told me in justifying Buddhist attacks on the Muslim minority in his country. “We’re in a culture war,” a Christian activist in the United States explained, adding that “it’s not a metaphor, but a real war.”

So over the years it has become clear to me that war is the central image in the world view of virtually every religious movement engaged in violent acts. Behind the moral justification of using violence in savage attacks are images of great confrontations, of war on a transcendent scale. My fascination with these notions of war have deepened into a profound curiosity about what war is, and why it seems to emerge so spontaneously to situations of extreme shock, humiliation and stress. I want to understand war, to understand how this template of the human imagination can transform our view of the world around us, and what religion has to do with it.

This book is about war—the idea of war, why it is so appealing and why it is often associated with religion. I want to know why war needs religion and why religion needs war. What fascinates me is the idea of war—war in the mind. I am less interested in the actual use of lethal weapons than the world view that makes that usage possible. I know that much has been written about the strategic decisions that go into warfare, about the cold calculations to gain economic benefits or political leverage at the cost of soldiers’ lives, and about the political and moral justifications that allow for armed force in response to perceived threats. As important as these considerations are, though, they are not what I want to focus on in this book. What interests me is the quiet yearning for war that makes such calculations possible, the public acceptance of the notion that in some situations of social tension, war makes sense. It is this idea of war—this totalizing construct of the human imagination that absolutizes one’s view of the world—that I want to explore.

It is this mentality that I am thinking of when I talk about war. It is not so much the act of warfare as the idea of it, the passion for war, the war worldview. The passion for war is not a rational thing. Though the conduct of military operations certainly involves a great deal of skill and rational calculation, it seems to me that war—the idea of absolute conflict that precedes many but not all military acts—is almost an instinctual thing. It has much more to do with emotions—or a kind of inarticulated mental reflex—than with conscious reason. It is what I mean by “the war mentality,” the way of seeing things in war-like terms.

In fact, the idea of war and the actions of military forces do not necessarily go together. There are police actions and humanitarian interventions, even on an international scale, that involve deadly force, but they are seldom regarded as war. A military raid intended to locate culprits and bring them to justice is usually not thought of as war, but as a kind of police action. The Philippine government in Marawi explained that it was simply going after culprits in a violent gang. When the FBI surrounded the Branch Davidian Compound in Waco, Texas, on a fateful April day in 1993, their intention was not to kill the leader or burn alive the inhabitants of the compound. The FBI agents were not at war. But the members of the movement, trapped inside in what seemed to be a desperate situation and informed by biblical prophecies about the war at the end times, clearly saw things differently, just as the Muslim separatists in the Philippines saw Marawi differently. To them it was a salvo in a war in which they were a target. Hence militant actions are seen differently from different social perspectives. For those who accept that the motives of the U.S. and Philippine governments were lawful, these are cases of police action. For those who question the motives and perceive that there is a bellicose relationship between resistance groups and the government, Waco and Marawi were skirmishes in enduring wars.

These examples show that the application of military force and the idea of war are not necessarily identical. Similarly the pursuit of the al Qaeda activists in Afghanistan after September 11 could have been justified without the absolute and totalizing language of a “war on terror.”  Moreover, the idea of war does not require constant military action. The Cold War, for example, involved various regional military encounters—in Cuba, Korea and Vietnam, for instance—but the overarching concept was greater than any of these specific military skirmishes.

In the public pronouncements and popular sentiment in the years that followed 9/11, the war on terror was seen in the American imagination to have been in some ineffable way blessed by God. In the United States, as elsewhere in the world when the sound of war drums is heard, the rise in the language of warfare is accompanied by religious rhetoric. Just as the Islamic terrorists themselves proclaimed a holy war against America, the US militant response was also accompanied by a religious refrain, “God bless America.” God, it seems, is always where the military action is.

This has been true throughout history. Whether it is the warfare of the Hebrew Bible or the great armies of the Hindu epics, God has marched alongside conquering armies. In our attempt to understand the idea of war, therefore, it is inevitable that we will be trying to understand what God has to do with it. Why is religion so full of warfare, and why do wars always seem to employ God as a mercenary on either side?

This book, then, is a meditation on war and religion. It is a reflection on the dark side of the human imagination, and its capacity to deal with deep discomforts and profound anomalies in what strikes me as a horribly irrational and quite peculiar way—through constructing a template of meaning that totalizes the differences between positions, satanizes enemies, and gives moral sanction to the most hideous acts of destruction. What is this terrible thing called war, why do we humans want it so, and why is God so often in command?

God at War: Alternative Realities of War and Religion, is in press and will be published in Fall 2019 by Oxford University Press, New York, and in a German edition by Herder Verlag, Frankfurt.