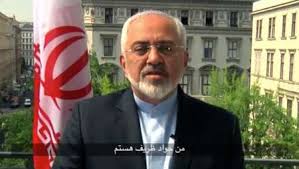 The urbane, articular foreign minister of Iran—Javad Zarif—recently did a remarkable thing. He filmed a YouTube video in English to explain the importance and significance of the current negotiations with the US and other countries that would guarantee that Iran is free of nuclear weapons and would end the economic embargo of that country. And then he did something more.

You can watch the clip here: http://bit.ly/1ThePJ5

The video was remarkable not only because it was aimed at an English-speaking audience, most likely Americans, but also how the topic turned towards another subject midway through the brief clip. In the first two minutes Zarif focused on the crippling effects of the economic embargo, but then he morphed into quite a different topic. This subject was ISIS.

Zarif made the point that the world—implicitly the US and its allies—should join with Iran in confronting the new challenges of “extremism” in “the cradle of civilization,” the Babylonian heartland that is present-day Iraq. Zarif declared that Iran has always been against “extremism,” a point that many Americans would debate considering that country’s support of Lebanon’s Hizbollah militants over the years.

But few would debate the fact that on the subject of ISIS the US and Iran are thrown together in fighting the same foe. Iran has sent its top military strategist, Qassem Suleimani, to Baghdad to help the Iraq government in its efforts. The US has its own military advisors on the ground and have engaged in a series of air strikes on ISIS targets, including the recent battle to regain the city of Tikrit. No one can doubt that the US and Iranian military advisers were in communication with one another, if not directly coordinating their efforts together.

As long as the US and Iran are publically in opposition over the nuclear/embargo issue, however, it will be difficult to have more open and easy channels of communication between the two countries over ISIS, and to better coordinate their strategic efforts. Thus Zarif was correct in linking the battle against ISIS with the nuclear talks. As important as the nuclear issue is, a resolution of it will lead to a much more important goal: defeating ISIS.

Though in the US the media often imply that the US can win the struggle against ISIS by itself, this is far from the case. The players in the immediate neighborhood are far more important. Along with the Iraq government’s army and Shi’a militia, the Kurdish Peshmerga forces play a critical role. But the long range solution to the problem depends on the action of a much larger player: Iran.

Thus if the US sees the defeat of ISIS as important in facilitating global peace, it needs Iran. In an earlier posting, I explained why Iran is so key to this solution. It is related to the Sunni-Shi’a divisions within both Iraq and Iran, and how Iran plays an influential role in Shi’a politics in the region.

To understand the importance of Iran in solving the ISIS problem, it is important to remind ourselves how ISIS came to power in the first place. The ISIS militia may be portrayed in the Western media as crazy bloodthirsty fanatics, but that alone would not have allowed them to ascend to the heights of power that they have now attained.

The success of ISIS is due to the support of moderate Sunnis in both Syria and Iraq. According to an insightful article by Graeme Wood in The New Republic, the ISIS supporters consist of three types—psychopaths, believers, and pragmatists. The psychopaths and believers are largely recruited from outside the region. The cruel executioner in the videos of the beheadings of Westerners is likely a British citizen who was lured to the region as a soldier of fortune in a grand imagined war.

But the largest group of followers are the pragmatists in the ISIS ranks, who are local Sunni Syrians and Iraqis who see the movement as their best hope for getting ahead. In both countries, the Sunnis have regarded themselves as oppressed by Shi’a political leaders—Nouri al Maliki in Iraq and Bashir Assad in Syria. In both cases the large Sunni population had lost hope that they would ever be treated as more than second class citizens in their own countries.

Once again Sunnis were lured by al Qaeda style of jihadi activists, now under the banner of ISIS (the Islamic State of Iraq and al Sham, or ISIL, since al Sham can be translated as Levant, the old name for greater Syria). It also calls itself the Islamic State, as if there could be only one. Many outside the movement call it by the term “Daesh,” which spells out the acronym of the group’s Arabic name, al-Dawla al-Islamiya fi al-Iraq wa al-Sham; and conveniently the term in Arabic means something akin to “bullies.”

But even though they are bullies, Daesh or ISIS does give a role to the local Sunni leaders who feel alienated under Shi’a rule. Could these moderate Sunnis be lured back as they were during the Awakening in 2008? That depends to a large measure on what happens in Damascus and Baghdad, whether the Shi’a governments there are open to shared governance.

Last year Iran showed that it understands the importance of shared governance in order to appease the Sunnis and keep ISIS support from growing. When the US said that it would not support the al Maliki government in Baghdad without a more open (that is, Sunni inclusive) policy, this position was echoed by Iran, and by the Shi’a clergy in Iraq most closely allied with Iran, Ali al-Sistani.

With weeks, al Maliki was gone. In September, 2014, the new Prime Minister, Haider al-Abadi, took office and pledged to take a more open stance to the Sunni minority. The BBC dubbed his regime “a new era in Iraq.” But it will take some massive changes, including redrawing the pro-Shi’a constitution, to make Iraq as inviting to the Sunnis as it did during the Awakening period. A great deal of mistrust will have to be overcome on both sides.

Syria faces perhaps an even more difficult challenge in finding a solution that will be agreeable to the Sunni minority as well as to the Alawite and Christian minorities that support the Assad regime. Assad is adamant, and some years ago turned down the best opportunity for reconciliation a couple of years ago with a UN proposal for a shared governance peace settlement.

The US can bomb all it wants to. But the only thing that will really make a difference is the erosion of Sunni support for ISIS. This will probably not happen until there is a change in attitude in both Syrian and Iraqi capitals. And in both cases, though the US can provide the military hardware, Iran holds the key to the political solution.

So Iranian Foreign Minister Zarif is right in his YouTube message to the world: behind the nuclear negotiations is a much bigger issue on which the US and Iran need to cooperate. It would be huge defeat in the united US-Iran struggle against ISIS if the two countries were unable to come together on a much more simple matter, the nuclear arms deal. Ultimately, we need Iran as partners in a much larger fight.