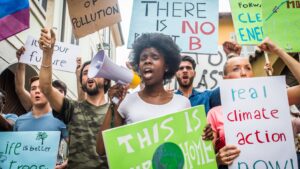 The recent Supreme Court decision to limit the regulatory power of the Environmental Protection Agency has been greeted with cheers from the far right. Many of them are Evangelical Christians, and they are convinced that freedom from governmental regulation is a God-given right.

Wrong. The most famous Protestant theologian of the 20th century would beg to differ. Morality, he claimed, was on the side of those who would control corporate power. This remarkably influential theologian–Reinhold Niebuhr– laid the moral groundwork for much of the regulatory expansion of the US federal government during the years of Franklin Roosevelt’s presidency.

Behind Niebuhr’s reasoning was a fundamental observation about human nature, corroborated with biblical insights. Individuals have a capacity for love and empathy. But when individuals band together into collectivities, they usually do so for a purpose. These purposes are often necessary for the full functioning of the social order, but they are limited. These utilitarian organizations are formed to make money, for example, or to achieve a military or political objective.

What these collectivities do not have is the ability to forgive and protect individual rights. Chase Bank will never grieve over your inability to pay your mortgage, for example, or to give you a break on the dates that your loans are due. Contrary to the famous statement of Mitt Romney in defending the Citizens United judicial decision, corporations are not “people, my friend.”

This means that if they are left to their own devices, corporations would exploit people as much as they could. The title of one of Niebuhr’s books aptly summarizes our dilemma: we are “moral men in an immoral society.” Moral leverage is needed, Niebuhr reasoned, to keep the potentially immoral power of corporations in check.

This is where government regulation comes in. It is one of two ways that people can contain the exploitive impulses of collectivities. The other is counter-vailing power. By this he means labor unions and peaceful protests, for example, as ways of countering the excesses of corporate control of public life.

But government regulations are the main vehicles for social control. For this reason it is no surprise that their main opponents are corporate entities. The lawsuit that was brought before the Supreme Court regarding the regulatory power of the EPA, for instance, was backed by large coal-producing companies in West Virginia. They were clearly annoyed by the financial limitations of the clean-air regulations of the EPA. Most of the rest of us, however, are grateful that such regulations exist, not only to provide safe atmospheric conditions for today’s society, but also to contribute to the control of greenhouse gasses and bridle global warming in ways that will affect generations to come.

Such regulations are in the scope of governments to provide, but only if the governments themselves are not in the grips of the very corporations that the regulations are meant to limit. This is why Niebuhr was so insistent on democracy, by which he meant not only a government freely elected by the people, but one that served and protected the people.

A truly democratic government is able to provide a voice for the people that enables it to control the worst excesses of corporate greed. Hence Niebuhr could proclaim, in the Forward to one of his books, Children of Light and Children of Darkness, that humanity’s “capacity for justice makes democracy possible,” and its “capacity for injustice makes democracy necessary.”

It is this ability to stifle injustices and promote justice that is a democratic government’s highest calling. It is not the enemy of corporate power, but it does provide a counter-weight and a moral channeling of its influence. Corporations may be a necessary and useful part of modern society. But they are not people, my friend.