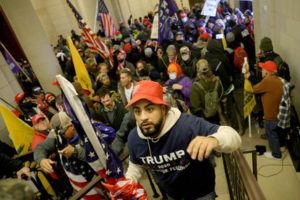 Shortly after the January 6 right-wing insurrection at the United States capitol building spurred on by then President Donald Trump, FBI agents came to the suburban home of Guy Reffitt in Wylie, Texas, and arrested him for being part of the mob. The person who had tipped off the FBI about Reffitt was his own son, 18-year old Jackson Reffitt.

When young Jackson was interviewed on CNN by Chris Cuomo after his father’s arrest, Jackson said he turned in his father because he thought it was the “right thing” to do. The young man explained that he thought that his father had become a danger to himself and others, including his own family, whom he threatened to shoot if they snitched on him. Unknown to his father, Jackson had already informed the FBI that his father had become dangerous. When Jackson was pressed by Chris Cuomo about whether the elder Reffitt had always been a conspiratorial extremist, the son said that he had not, but that he had changed in recent years, specifically the last four years.

What had happened in the previous four years was, of course, the presidency of Donald Trump, who was a fount of extremist and conspiratorial rantings. Jackson confirmed that this was part of what had happened with his father, saying that Trump “had manipulated him.”

But Jackson also mentioned another factor. He said that his father had become “more active on the internet.” He began talking about things that that went far beyond the personal and political rhetoric of Trump. The elder Reffitt said that this country is on “the end of times,” mirroring the apocalyptic language of the QAnon conspiracy movement.

Likely borrowing from the Christian Evangelical ideas of millenarian prophets, the QAnon ideas promoted a view of history that would culminate in President Trump’s second term of office. The anonymous person who calls him or herself Q began posting messages in 2017 claiming that the United States was controlled by an evil cabal of Satanic devil-worshipping cannibalistic pedophiles involving liberal politicians and Hollywood celebrities. According to the conspiracy theory Donald Trump knew about this sinister regime and was sent as a messiah to abolish it. The theory concluded that the cabal would end shortly after Trump’s second inauguration in a catastrophic event known as “the storm,” when a military coup would take control and the evildoers would be banished to Guantanamo prison. Then the world would be at peace.

Hence to QAnon followers there was no way that Trump could lose the election—he was ordained to have a second term. Only the evil cabal could have prevented him from taking office and fulfilling his messianic duties. That is why the counting of ballots that would certify Joe Biden’s election had to be stopped. Faithful followers like Guy Reffitt felt called to duty. As he prepared to leave for Washington before that fateful day, his son said that he told his family, “I’m about to do something big.”

Conspiracy theories like those of QAnon and other far right extremist movements are able to spread like wildfire on the internet. They often begin on obscure message boards, such as 4chan, which was replaced by 8chan, which in turn has been rebranded as 8kun. These are the preferred outlets of Q’s messages to his or her followers. But the messages and the ideas contained in them are quickly repeated on more widely accessible formats, such as Facebook and Twitter. Trump has included QAnon related messages hundreds of times on his own Twitter account. By 2020 the numbers of followers of QAnon have been estimated to be in the millions.

As the size of the movement grew and the dangers of its messages became more obvious, social media has moved to limit its use of their platforms. The 4chan and 8chan sites were closed down. Facebook began cracking down on QAnon sites and messages. In July 2020 Twitter began to remove the accounts of 7000 QAnon-related groups and individuals, later expanding that to 150,000 such accounts. By August 2020 Facebook said it had taken down 1500 QAnon-related user groups that had a combined following of four million. In October of that year it banned all QAnon-related groups and material.

The QAnon messages and communication among adherents continue, however, on other platforms, notably on 8kun and Endchan. They have also migrated to the dark web, such as Tor, “the onion router,” which is an alternative to the world wide web that is familiar to most internet users. The onion router has multiple encryption layers that make it difficult for those posting or using the sites to be tracked. Though they limit the wide accessibility of the conspiracy ideas they allow for even more free expression among the true believers, thus strengthening the cult-like nature of the movement.

Could Jackson Reffitt’s father have been a QAnon loyalist? Quite possibility. Or he might have been a fellow traveler, one of many right-wing enthusiasts who accept some of the conspiratorial thinking as true. According to a Pew Foundation poll, some forty percent of registered Republicans think that Democratic politicians are covering up a pedophile ring and that Donald Trump was trying to combat it. Neither of those statements are true, but they are central to the QAnon message.

What this reveals is the power of social media to disseminate false information. But more important, it shows their power not only to spread the ideas, but also to do so in a way that limits alternative, more objective, views of reality. A recent video documentary aired on Netflex, The Social Dilemma, describes the tunnel-like vision that is created purposely by the algorithms of social networks like Facebook, Twitter, and YouTube. They reinforce the users’ view of the world by identifying the kind of content they like, and then pushing similar content towards them and blocking alternative perspectives in an attempt to get the users to spend more time on their site. The goal of the social networks is to get more people to spend more time using the network and thus being susceptible to the advertising on it that monetizes their communication services.

While this may make good business sense in that it brings in a staggering flow of profits to Mark Zuckerberg and other owners of sites like Facebook and Twitter, it is not good for society. It enhances the trend towards what I have described elsewhere as the emergence of the digital self.

This digital self is new, in that it is a product of the digital age, especially the recent decade in which social media has become dominant, and is shaped by and responds to their power. The effect is to create three dangerous illusions.

The illusion of connectivity.

One is the illusion of connectivity. All of us who teach in a classroom experience the strange silence at the beginning of classes when students do not talk with one another but stare at their cell phones. They think they are connecting with others, and perhaps they are. But this kind of connectivity can be strangely alienating, a way of preventing the sustained social interactions that build friendship and trust. It can create a false sense connection without the hard work of really knowing others and creating authentic communities. One cartoon by Bizarro succinctly states the problem: a grieving widow looks over the empty audience prior to the funeral and says, “I expected more people—he had 2000 friends on Facebook.”

The illusion of wisdom.

There is also an illusion of knowledge created by the instantaneous availability of information on Google, Wikipedia, Facebook, and all the other purveyors of information at our fingertips. Yet it is selective information. After all, we are the ones who decide what words or phrases to put into the Google search engine, and it is Google’s algorithms that determine what responses come up first. Facebook has a way of reading our minds, or at least determining our political, cultural, and consumer tastes, and adjusts the postings to our Facebook wall accordingly. In these ways the information that we get simply confirms and reinforces our own values and opinions. So in a curious way, all of this avalanche of information is filtered in a way that actually makes us less informed. At the same time it discourages us from exploring alternative points of view or honing analytic skills since we are led to believe we already know what there is to know.

The illusion of power.

This leads to the most dangerous of the illusions of the digital sense: a false sense of empowerment. With all these resources of information at one’s fingertips (even though it might be fake information), we have the illusion that we know as much or more than anyone else. This is empowering. It leads to a distrust of expertise and authority, and the rise of an “opinion culture,” where everyone’s opinion is equally valid.

This challenges the whole range of established authority, not just in academia, where we sense this mounting disrespect almost daily, but also in the social and political institutions that lead our societies. An outside politician like Trump has an appeal simply by virtue of not being part of an established political party. The same phenomenon is seen in the cultural sphere, where the rise of new religious movements and demagogic preachers are part of the anti-authoritarian mood of the global age of self-confident self-empowered individuals.

This self-confidence is illusory, since it is not based on any real power or is channeled through democratic process of social and political change. It is rebellion that has no hope of becoming a revolution, and is easily exploited by demagogues who pretend to represent the voices of the populace. The dark side of this illusion of power is anarchy, a devolution of social institutions that are felled by the rise of a deep distrust of authority based solely on one’s own imagined power.

The digital self of the global age, therefore, is lonely but widely connected, limited in understanding but able to access vast resources of knowledge, impotent in an ability to act but empowered with a brazen self-confidence. These illusions of connection, wisdom and power in the global era contribute to the profound dichotomies that have emerged in societies around the world. They lead to an absence of trust in any form of shared truth, and as Jackson Reffitt discovered, they can lead one’s own father to an insurrection.