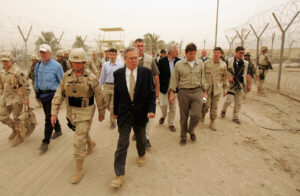 The only time I met Donald Rumsfeld, the Secretary of Defense under President George W. Bush,  was in a meeting in Washington where he briefly appeared. He was cocksure and jovial as always.
It was one of Rumsfeld’s signature features that he never apologized for anything. And quite likely he never regretted anything he did, including the most devastating.
The invasion and occupation of Iraq was one of those devastations. Perhaps worse than the invasion was the haphazard and irresponsible occupation.
This was one of Rumsfeld’s baby. Apparently he and his staff had virtually no preparation for what would happen after the fall of Saddam. I think the assumption was that it was a secular government that could run on its own.
In fact the country collapsed from chaos to anarchy to vicious ethnic rivalry. The emergence of ISIS was a product of this.
The US policies in Iraq, largely crafted by Rumsfeld and Vice President Dick Cheney, helped to create this chaos. I know this because Ambassador Barbara Bodine, who was teaching with me at UCSB at the time, was called back by the State Department to go to Baghdad to be the first person to be in charge of the reconstruction efforts. This was a week or so before the invasion.
She told me she asked for her staff and the plans for running the country after Saddam, She was told she’d have to create both. They didn’t have any.
Also Ambassador Bodine didn’t last, since Rumsfeld wanted a more compliant sycophant in charge, and that’s how Paul Bremer got the job instead of Barbara. She knew Arabic and was developing a plan for reviving the army and the administrative structure and getting support of neighboring Arab countries. Rumsfeld and Dick Cheney didn’t want any of that.
So as a result, Rumsfeld’s policies helped to create the sectarian politics that has plagued Iraq ever since and led to the rise of ISIS, which fed on Sunni resentment at being made second-class citizens by the Shi’a majority government.
So if you ask whether Iraq is better off now after Saddam, it depends on what ethnic group you’re in:
Kurds- love it. They hated Saddam and the feeling was mutual. He tried to literally kill them off. Now Kurdistan in the northern region of Iraq is thriving. When you fly into the airport at Erbil, as I have frequently in recent years, working a book on how terrorist movements end that features conversations with old ISIS warriors, you see a big sign saying “welcome to Kurdistan” (no mention of Iraq).
Shi-a – mixed feelings. Shi’a political leaders are pleased since they are now in charge of the country and are able to have an unbridled alliance with Iran (which was the big winner in the rise of Shi’a power). Shi’a militia have also grown enormously in part in opposition to US occupation (Muqtada el Sadr’s militia especially).
Sunni – big losers. When I went to Baghdad some months after the invasion and met with Sunni religious leaders they all blamed the US for what they saw as a Shi’a takeover that was making them second-class citizens. And they were right. Access to jobs, military appointments, government support were all difficult under Shi’a regimes. This resentment led to the tacit support of ISIS when it rolled into the Sunni regions of western Iraq, essentially creating a united Sunnistan with the adjacent Sunni regions of eastern Syria, for a time empowering Sunnis in both countries.
In my recent visits to refugee camps and prisons in northern Iraq, however, I have found the post-ISIS Sunnis to be deeply depressed. Their cities have been destroyed, their ISIS protectors no longer in power, and no change in their second-class status in either Syria or Iraq. The situation is ripe for the return of ISIS or the rise of another form of protest movement.
All this is Rumsfeld’s legacy. And he departed as always, cocksure and jovial to the end.
(My forthcoming book referenced in this post, When God Stops Fighting: How Religious Terrorism Ends, will be published later this year by the University of California Press).
Share this article!