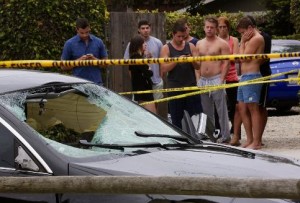 We are still in shock– the attacks this weekend were literally in front of my house in Isla Vista. But now that the candlelight vigil is over and the yellow tape taken from sidewalks, the question turns to why? Who was Elliot Rodger and why did he engage in this private act of terrorism?
In reading Elliot Rodger’s writings a portrait emerges of a disturbed narcissistic young man of privilege who was consumed with envy and blamed everyone else for his social failings. He saw his life like a movie (Alpha Dog was one of his favorites) and computer games, which he played incessantly (especially World of Warcraft), and gained the illusion of power in his arsenal of weapons including three semi-automatic pistols and 400 rounds of ammunition.
When he was in junior high school he played computer games 14 hours in a day, determined to reach level 60. It was the only skill in which he had a measure of success. In everything else from sports to classes to social conquests he was hounded by a sense of failure even though he was convinced he was “destined for greatness.” In high school and then college, sex was his obsession, though clearly his failing, since at the time of his death he had not even kissed a girl. He blamed the beautiful women who ignored him, and the socially adept young men to whom they were attracted, for his own failings. His 137 page autobiography details how he would like to take revenge on the “Day of Retribution” which was to begin with stabbing and killing his roommates, then shooting up a whole sorority, driving down the coast to kill his stepmother and younger brother, before heading back to IV to plow his car into as many attractive young bystanders as he could. Fortunately he was only partly successful in this savage fantasy.
Who is at fault for creating this cold young monster? Clearly the violence of American society permeated his life and informed his sinister project. He was living in a movie or a computer game. The easy accessibility of guns gave him the illusion of power.
His was an act of terrorism since it was a public performance of violence meant to spread fear and give him a sense of control. I would be tempted to call him a Christian terrorist even though he was not remotely religious since he would have been called a Muslim terrorist if his name was Abdul rather than Elliot. But it would be more accurate to call him an American terrorist. Like most “lone wolf” terrorists in recent incidents around the country and the world, he is a private actor; but he is also a part of a larger cultural momentum that valorizes extreme acts and convinces ordinary persons that they are failures if they do not live up to the lives of the culture’s successful and sexually powerful personae. It is a cultural failing and an American terrorism for which we can all take some blame.

2 thoughts on “Terrorism in Isla Vista”