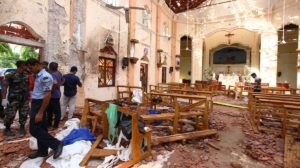 The carnage of the bombings in Sri Lanka on Easter weekend was truly horrendous. Approximately 300 were killed and many more wounded in eight bombing attacks in different locations on the island. The targets were Christian churches during worship and hotels where special Easter meals were being presented.

Who would do such a thing, and why? My initial suspicion that a Muslim group was involved was stoked by the government decision to shut down social media, including Facebook and WhatsAp platforms. I assumed that the government feared that the revelation of Muslim complicity in the attacks would unleash a new round of anti-Muslim hostility in the country.

My suspicion turned out to be correct. The government has now revealed that it is likely that the Islamic State –ISIS– was behind the Sri Lankan group called the National Thowheedh Jama’ath that has been identified with the attack. The word “Thowheedh” is probably a variant spelling of Tawhid, the Muslim concept of divine oneness, and “Jama’ath” simply means “group.” The addition of the English word “National” would indicate that members of the group wanted to be identified with Sri Lanka as a nation rather than some international organization.

Clearly, however, the National Thowheedh Jama’ath was not simply concerned about local issues. In fact this group has been the recruiting agent for ISIS for several years, sending fighters from Sri Lanka to Syria and Iraq to fight for the Islamic Caliphate.  Now that some fighters have returned to Sri Lanka after the territorial defeat of ISIS in the region, they are carrying out the global ISIS mission in their home land.

My initial suspicion about the possible Muslim connection was because of the international ISIS-related jihadi hostility to Christian churches in the Middle East and Asia. Though Christians are “people of the book” from a Muslim perspective and most Muslims respect Christianity, the jihadi position is different. It sees the imposition of Christianity in the Middle East and Asia as a colonial product around the world and a symbol of Western global control. Thus it is understandable that Christian churches, along with hotels and night clubs that cater to Western foreigners, would be a target of jihadi bombings not only in Syria, Iraq, Egypt, Lebanon and elsewhere in the Middle East, but also in Indonesia, the Philippines, and now in Sri Lanka.

In some ways it is odd that Muslims in Sri Lanka would be implicated in attacks on Christians, since both are small minorities (less than 10% of the population for each group) in an overwhelmingly Buddhist society. And it has been Muslims who have been the recent victims of violence in Sri Lanka, not perpetrators of it. The Easter attacks are going to make their lives even more miserable since undoubtedly many in the country will regard them as culpable in the attacks even though they had nothing to do with them.

For years the violence was between the largely Hindu separatist movement of Tamil Tigers in the northern part of Sri Lanka and the Sinhalese Buddhist majority. Sometimes government figures and buildings were also targeted in the internal civil war. But after the separatist movement was defeated a new form of ethnic violence erupted. The recent violence has been perpetrated by Buddhist extremist groups, including the Bodu Bala Sena, that often target the peaceful minority Muslim community in the country.

Why, then, would Muslims target another persecuted minority community, the Christians? Now that we know that ISIS was identified with the attack we know the answer.  The National Thowheedh Jama’ath recruited Sri Lankan fighters to serve in Syria and Iraq as volunteers for the ISIS army, and when some of the former supporters of the movement from around the world returned to their home countries they looked for local targets to continue the global war of all-encompassing jihad.

Though ISIS has been conquered as a regime with territorial control it clearly continues as a global ideology of terrorism. The Sri Lanka attacks demonstrated that there are continuing vestiges of an ISIS cosmic war that has not yet been subdued.