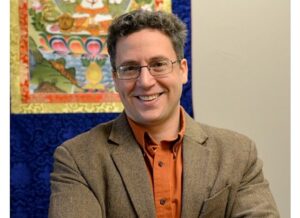 This essay was posted in Religion Dispatches with the title, “After Michael Jerryson Nobody Will Ever Look at Buddhism the Same”

It is perhaps not too much of an exaggeration to say that after Michael Jerryson no one will ever look at Buddhism the same way. Others have written about Buddhist violence and warfare, of course, but Jerryson brought it to public attention in a way that could not be ignored.

When he died this last week after over two years of struggling with ALS (the dreaded neurological Lou Gehrigs’s disease), Jerryson left a rich corpus of writings, including nine books. Among them were his solely authored works, including Buddhist Fury, and If You Meet the Buddha on the Road (quoting the famous line attributed to a Chinese Buddhist monk that ends with the words, “kill him”). He also edited the Oxford Handbook of Contemporary Buddhism, and the Oxford Handbook of Religion and Violence (co-edited with Margo Kitts and myself).

The cover of a book that Jerryson and I co-edited on Buddhist Warfare portrayed a young monk holding a handgun. When this picture appeared accompanying a review of the book in the London Times Literary Supplement, readers were outraged. “How could this be?” several readers demanded to know, “since as everyone knows Buddhism is the religion of nonviolence?”

After Jerryson everyone now knows that Buddhism is like every other religious tradition on the planet. It is capable of inspiring great moments of insight and fomenting peace and toleration. But it can also accompany the angry attacks of Buddhists, goaded on by activist monks, in slaughtering Muslims in Myanmar, tsetting their houses on fire and burning the innocent victims alive. This too is Buddhism.

In writing about such matters, Jerryson makes clear that he is not out to trash the tradition. Quite the opposite. Because Jerryson has lived and worked with Buddhists in Mongolia, Thailand, and elsewhere, he felt a kinship with the Buddhist community and an admiration for its tradition.

But Jerryson was also a scholar with enormous intellectual curiosity. As he explained in an 2010 essay in Religion Dispatches, “Monks with Guns: Discovering Buddhist Violence,” initially he came to Thailand to study Buddhist pacifism and social activism. But when violence broke out in Southern Thailand between Muslims and Buddhists, he wanted to go and see what the monks were doing there to bring about peace.

What he discovered was quite different. The Buddhist monks in the region had little interest in peace-making. Mostly they wanted to defend themselves and their Buddhist community, and many were armed in order to do so.

What Michael discovered, as he explained in his Religion Dispatches essay, was “not that Buddhists are angry, violent people. But rather that Buddhists are people, and thus share the same human spectrum of emotions, which includes the penchant for violence.”

Since then we have seen an abundance of other examples of Buddhists acting violently—which is to say acting the way that all people can do. Some of the most virulent are the Buddhist riots against Muslims in Myanmar and Sri Lanka where vitriolic monks have added to the climate of hate and ethnic anger.

It was this violent side of Buddhism that both troubled and interested Jerryson. It troubled him since he admired the tradition and cherished its attitudes towards peace and tolerance. But as a scholar he was also fascinated with the diversity within the Buddhist community and the degree to which ideas and images from the religious tradition could be employed in quite hostile ways.

Jerryson then began to ruminate over why we are surprised at discovering this dark side of Buddhism. Why should it be counterintuitive that Buddhist societies, just like all other societies around the world regardless of religious affiliation, have at times embraced violence?

This attitude of ours towards Buddhism, Jerryson reasoned, tells us more about ourselves than about the Buddhist tradition. There has been an image of pacific and reflective Buddhism that has been marketed in the West, often by itinerant Buddhist teachers. Not that this image is incorrect—there is much in Buddhism to admire and to share with peace-loving people everywhere.

It is not, however, the whole story. And for a scholar of Buddhism, what is left out of the popular image is as interesting as what is included.

Jerryson’s interest in Buddhist violence has come at a critical time in global history. Increasingly violence and religion have been associated together in movements of xenophobic religious nationalism, not just in Buddhist societies but around the world.

For this reason Jerryson began to turn his attention more broadly to religion and violence around the world. He saw the phenomenon of Buddhist political violence within a global framework. His more recent work has focused on comparative studies, including editing a two-volume comprehensive set of essays on Religious Violence Today: Faith and Conflict in the Modern World.

Jerryson had outlined a new book project that he wanted to write. It would expand on some of the concepts that I have developed in Terror in the Mind of God, and try to identify the critical occasions in which religion and violence become fused in a way that results in real attacks, not just symbolic expressions.

One of the central ideas in this new book was to be the concept of “sacred emergencies,” moments of existential fear that drive the faithful into thinking that the world as they know it is in ultimate danger. This leads to faith-driven assertions of power and control that are often expressed violently.

Michael was never able to write that book. But he did write an extensive essay encapsuling the major ideas. Shortly before his death he sent me the manuscript of this paper, which will now be published in the Journal of Religion and Violence, a journal which for a time he was co-editor, along with his frequent collaborator, Margo Kitts.

Kitts and I have co-edited a Festschrift for Jerryson, Buddhist Violence and Religious Authority, that is soon to be published. It includes articles by scholars exploring a wide range of Jerryson’s concepts, showing their relevance to continuing scholarship. Some of the essays from that volume are featured in a special issue of the Buddhist Studies Review devoted to Jerryson’s work. Fortunately he was able to see these manuscripts and comment on them before his death.

In our introduction to his Festschrift, Kitts and I conclude by saying that these essays show that his fertile ideas will continue to nourish the field for some time to come. Indeed they, along with the whole corpus of Jerryson’s influential work, provide an enduring legacy, a continuing contribution to our understanding of the complex relationship between religion and public life.